A Day in my Life

Here's a glimpse into the day I had yesterday.

I hopped out of bed a little before 4:00 after my alarm clock woke me from a lovely dream I had been having. After taking care of my usual morning routine I filled a pot with cold water and set it on the stove to heat for LV's tea. (He wasn't allowed to drink coffee while his eyes were healing after the accident, and once he got the clearance to have coffee again he decided to stick with tea instead.)

While the water was heating I had my Bible time. I made the tea and got everything ready for LV by the time he stumbled into the kitchen a little before 5:00. He had his breakfast, we said our good-byes, and he headed off to work.

Rosie Mae got up as he was backing out of the garage. She did her usual Chloe Ting workout. I don't see how she can do these hour long things. I did a handful of the low impact options, while she continued torturing herself with the full high intensity workout.

I checked the schoolwork from yesterday and got the assignments ready for the day. The past few years I no longer check the schoolwork with a red pen. I have nothing against red ink, but instead of simply marking things wrong and grading it, I have a stack of cute post-it notes where I jot down the things they got wrong and then they get to do it over. I wish I had done it this way from the beginning. Having a second chance to correct things has been better for them.

I washed the living room windows and by the time I was done with that Sharon and Steven were ready to begin their school work. It went smoothly enough.

Rosie Mae had the day off work so she went to meet a friend with plans to go on a short hike and then spend the rest of the day at our house.

I wanted to make pie. I found a recipe to count towards our 52 pies challenge. It made two, my crust recipe makes enough for three so I decided to double the crust recipe and make some family favorite pie as well and send one home with Kenneth and Paige tonight. I got the pie dough mixed and ready to roll out when I discovered I don't have enough corn syrup for my recipe.

We'd have to go get some. Sharon of course wanted to drive, so I got in the passenger seat and we were off to a little Amish bulkfood store several mile down the road. They won't deal with me, being that I used to be a member of the Amish church, but there are no such restrictions on our children, so Sharon handled the transaction.

Their produce stand was open and I noticed they had peaches and sweetcorn. I wanted to can and freeze peaches this summer so I got Sharon to ask what the price is per bushel. I nearly fainted when she told me. $46.00!! I went ahead and got a peck for eating fresh, but forget about buying a lot for canning and freezing at that price. We also got a dozen and a half of sweetcorn and drove back home. Sharon happily navigating all the curves while Steven sat in the back cheerfully discussing his plans for feeding the cows with the corn husks.

I set the corn on the porch when we got home and went inside to tackle the pie. Somehow instead of six pie crusts, my double batch of dough made nine. I ended up making three pumpkin pie, two pineapple cream pie, and two pecan pie, substituting the pecans with rice krispies, making it safe for those with nut allergies. The remaining crusts I baked empty to be used at a future date to make banana cream pie or something similar. 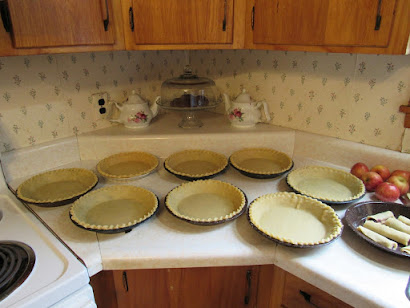 Rosie Mae and her friend arrived and decided to cook a (very)  late lunch for themselves. There was much talking and laughter as they worked together. The kitchen seemed tiny as I was still trying to get the last few pie ready for the oven while they were cooking.

Once the pie were cooling it was time to take care of the sweetcorn. Much to Steven's disappointment the cows weren't nearby while we husked the corn.

I went ahead and got the sweetcorn washed and ready to cook, and then peeled enough potatoes to make a big batch of fried potatoes with enough to hopefully have leftovers to make potato burritos for tomorrow morning's breakfast.

Rosie Mae's friend left and a little later Kenneth and Paige came over for supper. We thoroughly enjoy having them here and the evening passed swiftly. Once they left it was time for bed. I thought I might be able to dash out a quick blog post while everyone brushes their teeth etc, but my fingers couldn't move fast enough so that post gets to sit in drafts until I get around to finishing it some day.