I love winter and Christmas. There's something about this time of year that makes me feel warm and fuzzy. Somehow it awakens my creative side and makes me want to craft, sew, and bake.

The snow while lovely to play in or look at from the warmth of our home is a little different when I have to be out and about.

I just got home from running some errands. It started snowing earlier today and the roads were getting decidedly more adventuresome by the time I got back home. There was a moment when I thought I'm going to head for the ditch, but somehow I was able to avoid that unwanted visit. It did get my heart rate up quite a bit though.

Hank the snowman is still standing guard in our yard, though he has become quite a bit shorter. 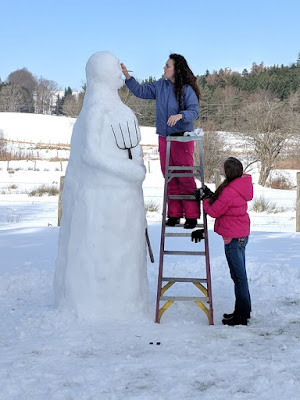 Being able to see the delight and wonder of the season through a child's eyes has been extra special to me this year. 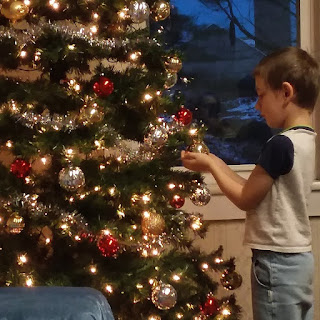 The season feels different though. On one hand I'm enjoying getting all those fun season-y feelings, and on the other hand I almost feel guilty for feeling those Christmas-y wintery feelings.

The Anne of Green Gables series has been a favorite of mine since the first time I read them some twenty plus years ago. When I heard that someone wrote a book about Marilla's life before Anne, I knew I wanted to read it.

I put a request in at the library in hopes I can get it soon after it's released, and before long I was notified it was ready for me to pick up. I liked the cover, which made me feel hopeful that I will indeed, enjoy the book. 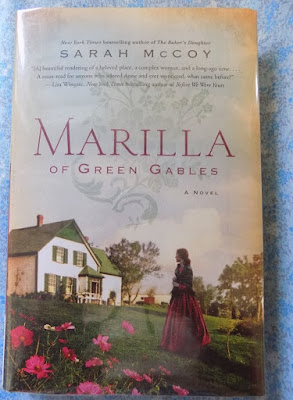 Settling in to read, it soon became apparent the author was no L. M. Montgomery. My first cringe happened at only page 16 where Marilla met her mother's twin sister for the first time. This was her reaction …

Marilla shrieked and jumped back, clutching her chest and accidently knocking over the box of yarn.

….. the sisters looked at each other, scowling  the same scowl, which made Marilla want to cry for terror.

I tried to ignore the unrealistic reaction and continued reading and enjoying the book. I found it oddly weird though when Marilla fell in love with John Blythe. Not because there was anything wrong with the story or the way it was written, but in that I was unable to fully connect or allow myself to fall with her, because I already knew (thanks to the Anne books) that the relationship would not lead to Marilla's happily ever after.

There was a scene that happened between Marilla and John, that made me feel uncomfortable. I read it with one eye squeezed shut and only peeked out of my other one as I hurried over that part.

There was quite a bit of political chatter happening in the latter half of the book which I didn't care for.

On the plus side, we finally find out what the fight was that caused them to go their separate ways, and Marilla's reaction when John married someone else.

I wasn't sure how there could possibly be a good end to the book, but the author pulled it off, and I actually really liked the ending.

Overall it was a good book. I didn't love it, but I did like it. I don't think I'll be buying my own copy though.

On the other hand, Before Green Gables by Budge Wilson was an excellent addition to my Green Gables collection. I really enjoyed reading about Anne's life before she was adopted, and knowing that she will have a happily ever after when she was sent to the orphanage gave the book an entirely different feel than the Marilla book.
Posted by A Joyful Chaos at 8:28 AM 15 comments:

Life goes on ... just how it does that is hard to explain, but somehow the sun continues to come up every morning and sets again every evening. People keep rushing hither and yon seemingly oblivious to the fact that my world has come to a halt. Which is as it should be, but it feels weird being stuck apart from the rest of the world almost as if I were in a different dimension where things don't feel right or normal. A dimension where a day can feel like a week, and a month like years, and yet the weekly grocery run feels as if it happens every other day.

Music ... even though I have always loved it, has become an almost constant.

My Bible and prayer times have become more precious as I draw strength, hope, and courage from our very source of life.

The phone can ring or a message alert on Facebook can pop up and for an instant I think it's Mahlon and then it hits me all over that will never happen again. I wipe my tears and reach out to others. I can no longer talk with Mahlon or do things for him, but I can pour time and love into the lives of others.

And so I keep doing the next thing. I keep focusing on the little things, cherishing those who I am blessed to still have in my life. And keep rejoicing that we serve a God who has conquered death and though it is painful right now, it's not the end of the story.

The calendar pages have been changed to the new month, so now instead of the giant dog in front of a little house I'm looking at a different but equally odd and disturbing picture. Sometimes I think it would be fun to be the person in charge of designing calendars and getting to choose only nice pictures to be included.
~~~~~
I'm using a new laptop ever since the one Mahlon gave me six years ago decided it will no longer work. This one has Windows 10. I'm trying to adjust, but I'm having a hard time with it. So far I haven't found anything good to say about it. What frustrates me the most though is that I can not transfer my Word program to this laptop. That means my writing has come to a screeching halt. I guess I'll have to go purchase the newest software and hope I'll be able to understand it.
~~~~~
My reading has been sporadic the past month, but I'm excited about jumping into a new book. I had requested Marilla of Green Gables as soon as it was released and there was a copy at the library. The Anne series is still one of my all time favorites and I can't wait to learn more about Marilla. I've started the book and so far it has been great. I'm usually hesitant when other authors try writing about my favorite places and characters, but this book as well as Before Green Gables by Budge Wilson have not disappointed.
~~~~~
I'm feeling Chritmas-y early this year. The 45 Day fruitcake cake is doing its thing on the kitchen counter. The girls and I have been preparing decorations to put up the day after Thanksgiving. I'm working on our plans for the 12 Days of Christmas celebration we want to do this year.
~~~~~
Of all the times I have been to the DMV I have found it to be a boring, quiet, air of desperation type of place. That is until this week when my favorite DMV experience happened.
Rosie Mae took her driving test and passed, which meant time for posing for the picture for her license.
The first picture turned out terrible. She burst out laughing when she saw it and the lady offered to take another one. Try two was a no go as well, followed by several more tries. She inserted typical Rosie Mae comments after each try. By the time she had her final picture taken the entire waiting room and staff was laughing.
The atmosphere of that room was completely different when we left than it was when we arrived. People seemed happy and relaxed as they were going about the business they had come in to do.
Posted by A Joyful Chaos at 9:01 AM 7 comments: