If I were a turtle I would have tucked myself inside my shell. If I were a hermit I would have retreated further. If I were able to hibernate I would have started a little earlier this year. If I were a blogger (Oh wait ... I guess that is me.) I may have become silent for a while.
September hit me hard this year. I wasn't quite expecting it for some reason, and so I've been retreating. I've been spending a lot of time outdoors hiking, enjoying nature, and simply soaking up the feeling of calmness, peace, and the presence of God. I know He is with me where ever I go, but being outdoors makes it feel even more real.
On Sunday it will be the one year anniversary of my brother Mahlon's untimely death. These days leading up to it are feeling a bit overwhelming at times, and so I read the Psalms, listen to uplifting music, and retreat from the noise of life.
I'll be back to regular blogging in October, but for right now I need a moment.
Posted by A Joyful Chaos at 5:53 PM 18 comments:

Reading ... I'm reading John in the Bible, and adding in a chapter or two of Psalms every morning as well. I find the Psalms so encouraging and soothing. They become more and more precious to me.

In fiction, the Anne of Green Gables series has still not been completed though I started a while ago already. I also have Garlic and Sapphires here waiting to be read again. I loved it the first time I read it, and am looking forward to enjoying it again.

In non fiction I read Life Changing Manga of Tidying Up last evening. (Basically the graphic novel version of cleaning Konmari style) It was weird. If it had not been a super fast read I would not have finished the book. I won't be thanking inanimate objects, clapping at books to wake them up, or sprinkling salt in bags. I also won't be recommending the book to anyone else. Like I said ... weird!!!

Watching ... The gentle mizzle outside the window and the steady drip drip of water from the small leak in the gutter along the front porch roof.

Listening ... to the sweet chimes of the wind chimes outside my window as they sway to the movement of the gentle East wind this morning.

Cooking ... last evening I made barbeque pulled pork sandwiches, only I used the left over beef roast instead of pork to make it. It turned out quite tasty,which say something since I don't usually care for beef.

Cleaning ... nothing that exciting. I cleaned the refrigerator out yesterday. I try to do it every week to keep it from getting to be a big project. Something had spilled so it took a little more effort than usual to clean it.

Wearing ... a mint green dress. I look as if I'd be ready to celebrate Easter.

Playing ... we played Hoagie, In a Pickle, and Fruit Punch yesterday. Each happens to be fun, fast, and don't require a lot of strategy. Sometimes it's fun to simply play for fun!
Posted by A Joyful Chaos at 9:47 AM 8 comments:

Email ThisBlogThis!Share to TwitterShare to FacebookShare to Pinterest
Labels: Currently

When a child is hurt because of someone jumping to conclusions and judging them before hearing the entire story you hurt for them and then share your own experience of having been judged wrongfully.
The child's story is not mine to share, but I can share a few of my own. I find having experienced these makes me want to hesitate before being so quick to jump to conclusions.

Every year Dad would get a huge pile of firewood from Grandpa's sawmill. We would unload it at home and then allow it to season for a year before moving it into our woodshed the following fall.
One fall we had moved most of the previous year's firewood into the woodshed, but there were still quite a bit of pieces half way buried in dirt and fragments of decomposing bark.
Dad had asked me to dig out those pieces yet and move them inside. My two youngest brothers followed me everywhere and naturally they accompanied me outside to help. I squatted down and dug out the pieces and they would stack them on the wagon and once it was filled we would take it to the woodshed to unload it.
Dad had some errands to run and had called a driver to take him where he needed to go. The driver arrived and had to wait a few minutes until Dad was ready to leave. I kept on digging out stray pieces of firewood and Ivan and Raymond were still happily stacking any piece I unearthed onto the wagon.
Dad left to take care of his errands, and when he came home he unloaded everything while the driver waited. I was still working on the firewood project. When the driver was ready to leave he stopped next to where I was digging out another piece of wood, and gave me a piece of his mind about how disgusted he was that I was so lazy that I would just sit there and have my little brothers do all the work.
I simply gaped at him and before I could find words again he had driven off.

With Mom busy with customers most of the time, I was the main caretaker of my youngest siblings. I was sixteen when Raymond was born and he was by my side constantly.
One day I was working in the garden with Raymond toddling around near me trying to help or picking up little rocks to play with when an older "English" pastor stopped in.
He saw me in the garden and came over to talk a little before heading to the woodworking shop where Dad was busy making chairs.
Raymond wasn't too fond of strangers and clung to the skirt of my dress. I scooped him up and stood there holding him as we talked.
The pastor proceeded to tell me how disappointed he was to see even the Amish have unwed mothers, but assured me God could forgive my sins and still use the little guy for His glory. He then marched off to find my Dad and then it dawned on me he thought my brother was my son.

These two examples serve as a good reminder why I think it's important to understand situations before being so fast to think the worst of someone.
Posted by A Joyful Chaos at 6:32 PM 8 comments:

Our weekend was full.
It started when my alarm clock jangled me awake at 3:00 AM on Saturday morning, and we got up and hurried to get ready to go visit LV's parents.
The children were excited to get to see their grandparents once again, so instead of being sleepy and groggy that early in the morning there was an air of eager anticipation as we prepared to leave.
The traveling was uneventful, and we arrived safely and were warmly welcomed into their home.
Our time there was spent laughing, talking, eating Grandma's delicious food, playing games in their basement, and taking pictures of her beautiful flowers. All in all it was a wonderful time that we all enjoyed. 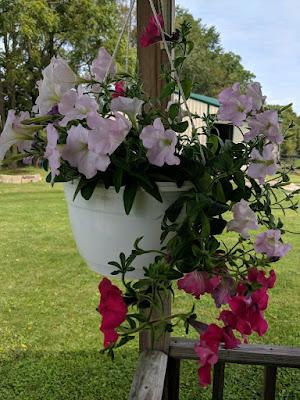 Fast forward to this morning, my alarm clock jangles me awake, and I get up to go about my morning routine. Once I took care of that I headed to the kitchen to start the coffee and blinked in confusion when I saw the clock on the stove had only 3:12. I checked the other clocks and they all agreed with it, and then it dawned on me that I had forgotten to reset my alarm clock to the proper time after we got home.
I decided 45 minutes isn't enough to make it worthwhile going back to bed, so my day has been off to an early start.
We'll have to see how it goes. Yawn.
Posted by A Joyful Chaos at 7:15 AM 8 comments: