1. Way back when (the Hodgepodge bicentennial to be precise) several of you submitted questions as part of a giveaway Joyce was hosting. She went back to that list for inspiration today and found a question  submitted by Marla, who blogs over at Marla's Musings. Thanks Marla!

She asks-At what age did you feel like a 'grown-up'? What keeps you young now?

I'm not sure when I started feeling grown-up. Probably some time after Sailor was born.

I still don't feel like I used to imagine being a grown-up would feel.

Our children do equal parts of keeping me young, and making me feel old.

2. When did you last buy a vehicle? Was this by design or because you had no other option? Was the car/truck purchased for your own personal use or was it bought for someone else to drive? On a scale of 1-10 (with 10 being delightful and 1 being 'pass the Excedrin') how would you rate the experience?

The last time we bought a vehicle was three years ago. We needed one that would fit our entire family since Buddy had come along. It was an older vehicle, but has served us well. The experience of getting it was pretty much a 10.

3. Corn bread, corn chips, corn pudding, corn on the cob, cornflakes, corn chowder-your favorite of the corn-y foods listed? What needs to be served alongside your selection?

Corn on the cob is one of my favorite foods, ever. I don't need much of anything to be served alongside. Some fresh tomatoes from the garden might be nice, but not necessary.

When I was growing up meals used to be simple when sweetcorn season rolled around. All we needed was 80-100 cobs of corn and we were good to go. It sounds like a lot, but it was all we served, and with a family of hungry boys it took a lot.

4. What's something in your life that regularly requires you to 'put your thinking cap on'?

School. I'm creating our own curriculum for state studies this year. I had wanted to get most of it done before we start back, but instead I'm still doing a lot as we go. It has been interesting so far, and much more fun than the usual capital, state flower, bird, tree, etc. that most state studies seem to stop at when there are so many other fascinating facts and history to dig up if you take the time to do so.

5. Share a favorite movie set in a school or classroom, or whose theme relates to school days in some way.

The only thing that comes to mind is Little House on the Prairie. Not exactly a movie, but they did include a lot of school scenes.

6. Reading, writing, and 'rithmatic' are commonly referred to as the three R's. What are the three R's in your life right now?

This one is simple. Reading, writing, and arithmetic. It's what our days consist of. Even Buddy is getting into the fun and doing an hour or so of school every day.

7. What's something you've learned or tried recently you can say was as 'easy as ABC'?

Creating some things in WORD. It took me a few minutes to get it figured out, but it's easy as ABC since I understand how the program works.

It's a good idea to not inhale too strongly before trying to blow a puff of dandelion seeds. They tickle dreadfully if you happen to inhale them.

How's that for a random thought?
Posted by A Joyful Chaos at 7:19 AM 11 comments:

In addition to our usual studies this school year we have added some in-depth state studies. It has been interesting doing research and pulling things together to make this possible. We decided to study them in order they became a state, so first up is Delaware.

There's so much interesting history there that we have been digging up. For the children an added bonus has been that I've been telling them the stories my Grandpa told me the winter before LV and I got married.

Delaware used to be, and as far as I know, is still the only state that has an Amish community calling the capital their home.

Of the many stories Grandpa told me about their life in Delaware there were a few that have always amazed me.

In the 40's when his children were still too young to be able to really pitch in and help around the farm, Grandpa would drive into town with his horse and wagon, to the jail and get a load of inmates to clean out the barn, and do other work. The only thing required of him was to feed them three meals and have them back at the jail by a certain time in the evening.

There was always a line of men, eager to help him. They loved Grandma's hearty meals, and most were excellent help.
Posted by A Joyful Chaos at 7:08 AM 8 comments:

The last time we relocated was five years ago. We moved ourselves.

I love the area we live in now and will happily stay here for the rest of my life.

My least favorite part of moving is all the work involved. All the packing and unpacking and the endless lifting and toting. I get tired just thinking about it.

2. When were you last 'moved to tears'? Explain.

I get really invested in good books, and was recently moved to tears by one I was reading.

3. Do you have rules about eating in the car...any forbidden foods? What's the last thing you consumed in your car? Your go-to car snack when traveling long distance?


It depends a little on the age of the one eating the food. We don't like having any messy food in our vehicle. Cheese curls and chocolate were both a big no-no for the children when they were younger. The last thing I ate in our vehicle was a cheese stick.

My favorite go-to snack is Chex-Mix. We usually take quite a variety of things to snack on when we travel, bananas seem to be a favorite for the rest of the family. I feel good about them eating them, even though they are at the bottom of the list of fruits for me.
4. Share a favorite song relating to cars and/or driving.


Can't think of any right now.
5. What's your most frequently visited drive-thru...Starbucks? the bank? the pharmacy? some other window?

I've never been to a Starbucks. Thankfully we don't need the pharmacy often at all. The bank is the only drive through we use.

6. "He who hesitates is lost"...would you agree? When it comes to making decisions do you generally act quickly or do you more often than not fall into the 'lost' category?

I don't really agree with this.

Whether or not I act quickly on decisions depends a lot on how much of an impact it will make on our life. Little things can usually be made quickly. Otherwise I think there is a lot of good that comes from patience, hesitation, and simply waiting on the Lord.

7. When was the last time you got lost? Was it stressful or an unexpected happy adventure?

The last time we got lost was back in 2006. It was both frustrating and hilarious.

Our new school year is off to a good start. Yesterday as part of our nature study I made a 'bracelet' using duck tape with the sticky side turned out. We went outside and collected anything that caught our eye and stuck it to the tape. The results were pretty and gave us inspiration to research some of the plants we aren't very familiar with.

Buddy loved participating and would happily have made many more nature bracelets. 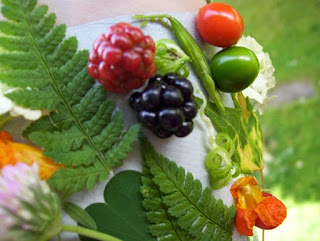 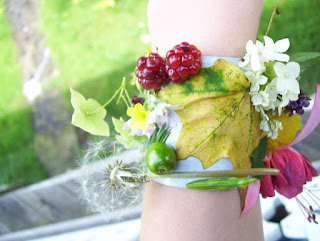 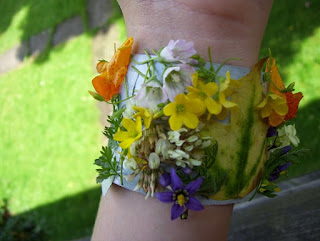 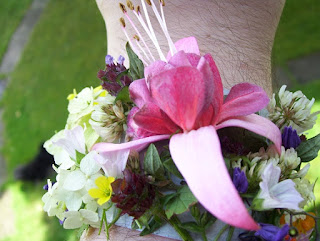 We've been having a pleasant summer. Here's a glimpse: 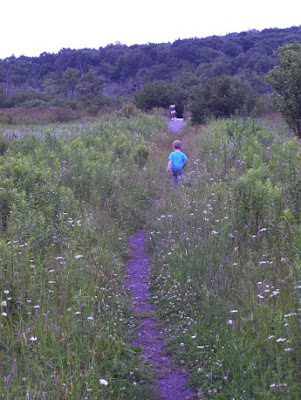 We're doing the stay-cation thing again this year, and have been enjoying a lot of hiking in the evenings. It was all great until we decided to try a different trail, which happened to be a few miles more than anticipated and I got lovely quarter sized blisters on my feet. It reminded me a little of this. 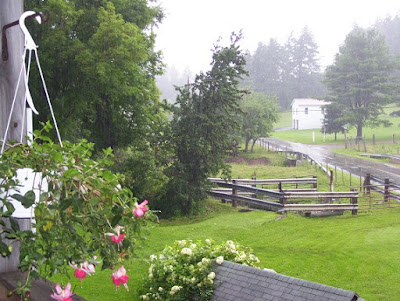 I enjoy being on our front porch when it rains. The girls enjoy the rain enough that they opted to venture off the porch and wash their hair in the rain. Results are dripping wet dresses and squeaky clean hair. 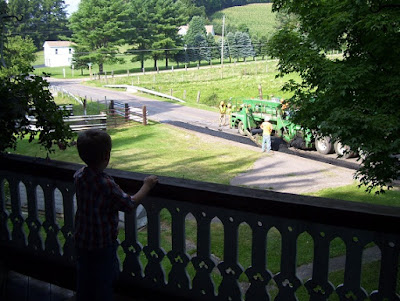 Our road is finally being worked on. After being filled with potholes for so long we're all happy to see it getting fixed. They work slow enough that Buddy can spend hours on the porch watching. 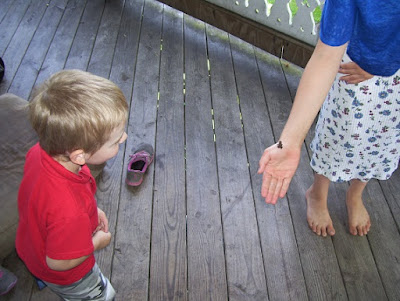 We have a lot of frogs this year for some reason. Buddy is equal amounts fascinated and repulsed by them, even when they are safely on his sister's hand. 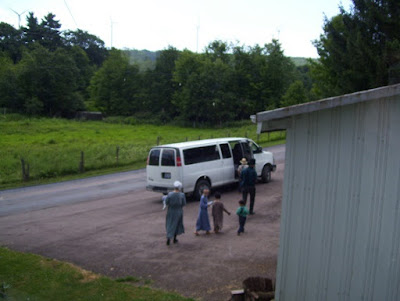 Having my brother, his wife, and their six children stop in for a short visit was great. 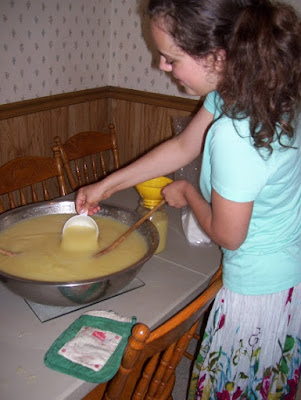 Canning applesauce with apples from a friend's tree.
The apples on the trees by our house will soon be ripe as well. Those will be used to make pie filling. 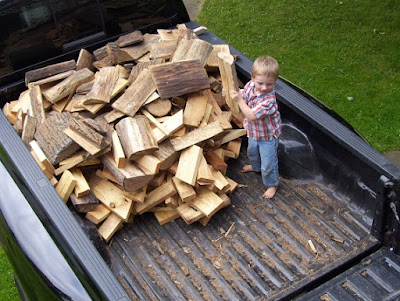 Making firewood. Buddy absolutely loved trying to help. He carried most of what you see in the picture to the back of the truck for Sailor to stack it in the porch basement.
Posted by A Joyful Chaos at 8:26 AM 7 comments:

I have been blessed with lots of friends of all ages. Part of the fun with the friends my age is how we can watch each other's children grow up and start spreading their wings a little.
One of my best friend's daughters has been creating things to sell in an Etsy shop. You should check it out. BePureBeBeautiful
She is quite the talented young lady and has been creating some of my favorite things. Things such as candles, bath fizzes, and more. 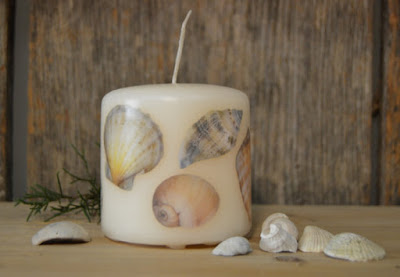 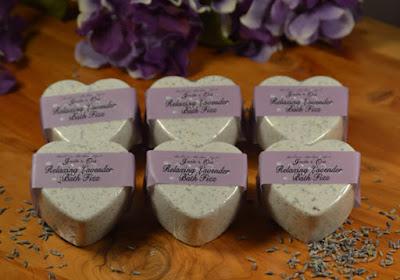