The Year of Pie

One of my goals for the year 2020 had been making 52 different kinds of pie. I'm happy to report that I successfully completed that challenge with a few extra kinds thrown in for good measure.

Other than our family favorites I really liked all the variations of cheesecake pie. The Grape Crumb pie is one I'll be making again, as well as most of the savory pies

I would not recommend anyone ever make the Poppy Seed Pie. It was far from tasty. The texture didn't help any. It was a gelatinous, crunchy, slimy, sweet, yet earthy mess. None of us were able to take more than a bite.

A few others weren't a hit either. The Apple Butter Pie I had high hopes for but it ended up being a disappointment. The Mystery Pie might have been okay, but halfway through they figured out what the mystery ingredient was and promptly stopped eating it.

Over all it was a success. I still have pie I want to try someday, but for now I'm glad to be done with this challenge and focus mostly on family favorites for a while.

Here's a picture of the list of 52 pie I made this year. 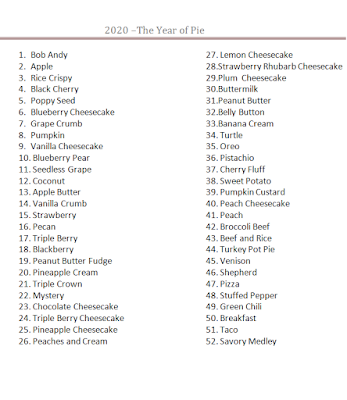 1. This is the 400th episode of the Wednesday Hodgepodge. I haven't participated in all of them but, that's a whole lot of Hodgepodging folks. 2000 questions if my math is right. So, what's something you feel like you do 400 times a week?

Taking things upstairs. It seems there's constantly something on the stairs waiting to be taken up the next time someone goes that way. I don't quite understand how it seems to be a never ending stream of things.

2. Tell us where you were and something about what your life looked like in the year 2000?

I was living on a dairy farm and trying to adjust to being a new mother. Those were sweet, yet at times overwhelmingly busy days.

Cinnamon rolls would be my favorite on the list. My mother-in-law used to make the best!
I don't care for the red hot cinnamon candies. The only reason we used to have them was to make cinnamon pickles. Those used to be a favorite, but it's been quite a few years since I last made them.

4. Does Christmas 2020 (or Hanukkah) look much like it has in years past, or is this year vastly different for you and your family? How so? How are you feeling about it all?

Christmas this year will look much like it has for the past 14 years. The only difference being, Kenneth is now married. He and Paige are planning on coming over though so we're looking forward to that.

5. What's one thing you need or want to do before this year ends?

I'm hoping to complete my 52 pies in 2020 challenge that I set for myself at the beginning of the year. I've made well over 52 pies this year, but not 52 different kinds yet.

6. Insert your own random thought here.

Only our favorite festive snacks and treats were made this year. We've been enjoying them in these days leading up to Christmas.
The gifts have been wrapped, and everything seems to ready for Christmas with a little time to spare.

For the past few weeks I have been tracking a package as it treks hither and yon across the U.S. It reached a town near us several times already and then switched course, adding stops in Illinois, Charleston West Virginia, Memphis Tennessee, and now it's stuck in Detroit Michigan.

At this point I'm giving up on it arriving in time for Christmas. I think I'll print out the tracking history, frame it, and gift it. By now it's more interesting than the original gift would have been.

I pulled in next to the cart corral and parked just as one of my favorite songs started playing on the radio. I was alone so I turned up the volume and sang along (heartily).

The song ended and I returned to reality. Reaching for my mask I noticed a lady standing there looking at me after having returned her shopping cart.

Uh-oh my impromptu singing session had not been quite as alone as I thought. Ah well, I can hide behind my mask.

I exited the vehicle and tried to lock it, accidentally hitting the alarm instead of the lock.

A few tries and I got it shut off. I avoided all eye contact, scraped up what little dignity I had left, and hurried inside the store to get my weekly shopping done.

Steven was still sleeping this morning as Sharon and I did our regular morning chores about the house. As it became light outside we noticed the sky was filled with drifting snowflakes.

"Steven is going to be so happy," Sharon said. "He told God yesterday that he would enjoy a birthday gift of snow if He has time and doesn't mind."

A few minutes later a beaming, newly nine year old came down the stairs, absolutely thrilled to have received the perfect birthday gift.

As I was reorganizing the store room yesterday, I came across some of my old notebooks. One of them had been filled with songs I enjoyed singing during my teenage years. Songs I didn't want to forget.
I paged through it, most of the songs I haven't thought about in years, but seeing them I was pleased to remember how to sing them.
I kept paging through and found one of my all time favorites from those years, and it brought back a memory.

~~~~~
We were sitting in church listening to the new bishop preach. In his sermon he was telling us how once we die our entire life will play back for us and we will be able to see and hear every little thing we ever did or said.
I assume he wanted to stress the importance of making good choices and not doing or saying things we would regret, but that wasn't what I was pondering.
I tuned the rest of the sermon out as I thrilled at the prospect of being able to someday watch my life be replayed. I knew what I was going to do. At every chance I had I would sing my favorite songs. I would make my end of life play back filled with my favorite things to be enjoyed one last time.
And so I sang, and sang, and sang some more. Every day got at least several run throughs of my favorite song and then what ever other songs I felt like singing.
I might not have been allowed to listen to music, but I was determined to have my playback filled with songs.