I think the thing I miss the most about being Amish is how we never had to worry about being crippled when the power goes out. Wood and kerosene stoves worked equally well in all kinds of weather. The air pump in our well kept right on working, and all our gas lamps kept on performing just fine.

Most days I wouldn't even dream of exchanging the convenience of electricity, but days like today it can be a teensy tiny bit tempting. It looks like the weather could get bad soon. With lots of ice and wind. It has started already. So the bathtub has been filled with water, as well pails, and gallon jars. Some food has been prepared that we'll be able to enjoy without having to heat it later. 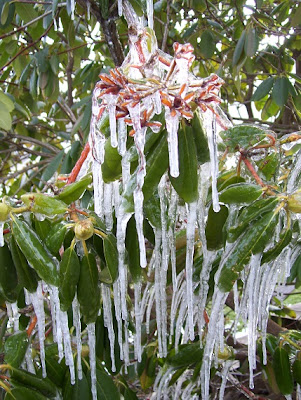 I'm hoping all this preparing wasn't necessary, but I would rather be prepared and the power stays on, than waiting until we lose it before we do anything.
Looks like another perfect day to try some crafty type things. Like these cute spring daffodils the girls made. 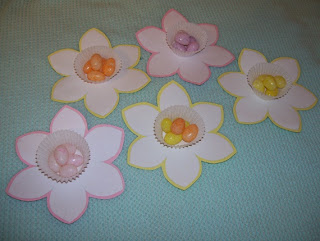 On Valentine's Day, LV had made arrangements for the children to stay at a friend's house and had reservations for us to eat at a restaurant we had been wanting to try for quite a while. We looked at their website and were impressed and then googled for reviews which should have been our first warning sign, but we chose to focus on the good ones and disregard the one star reviews.

After dropping the children off we arrived at the restaurant and were met with our first obstacle. Finding a door to enter. The doors along the front of the building were all locked, so we ventured into a dimly lit alley and passed multiple doors before finding one that would open. Upon entering we were sure we were in the wrong area. Employee only signs were slapped on the doors along the hallway we were standing in. The sound of water trickling made me look up to see a home made fountain they had created using patio furniture and some other items. 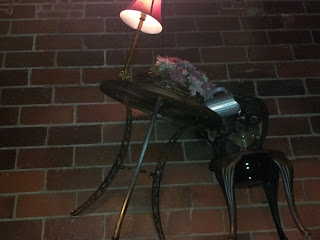 We wandered a little farther down the hallway and around a corner where we were greeted with this: 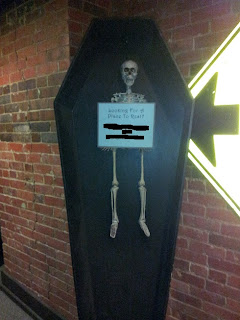 In front of us was a stairway, but we were expecting someone to appear at any minute and chase us away so instead of climbing the stairs we decided to try to find the right entrance, because this surely couldn't be it.

After circling the building again we were beginning to feel like giggly teenagers. We finally decided this spooky hallway was indeed the only option we had. This time we climbed the stairs and someone soon came to seat us.

The decorations they had can only be described as interesting. They liked books and there were some on every windowsill as well as piled on old ladders. Weather beaten doors and crates were hung oddly here and there as well as some more, lets say, interesting arrangements. 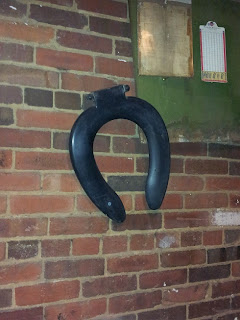 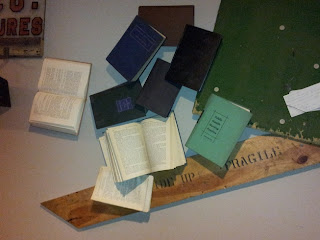 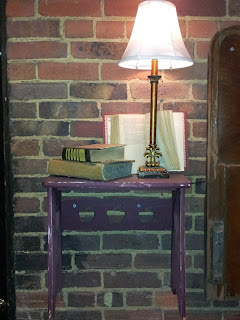 The service left a lot to be desired and the food was mediocre at best. And while we will probably never eat there again I have no regrets that we tried it. It was a fun memorable evening with lots of laughter that we'll be able to talk about with fond amusement for years to come.
Posted by A Joyful Chaos at 10:22 AM 11 comments:

I recently received this comment on one of my oldest posts:

I do not mean to be rude...just I cannot ask any Amish because there are none in my homeland.
You write so positively about your childhood - are you still allowed to speak to your family after leaving the Amish?  No offense meant. ~ Andrea

Yes, I can still speak to my family. Our relationship has changed from what it was before we left the Amish, but that doesn't mean we can't have contact with each other.

It is harder to find topics for conversation since they no longer want to share a lot of things that happen in their community because a lot of that is reserved for only discussion among Amish church members.  At the same time I have to watch what I say because a lot of our life now involves things they don't approve of. For example: what we did during the recent power outage, because that would remind them we have electricity. Activities in our church, because Amish don't participate in activities like that. How I went here or there, because they would be reminded how I now drive a vehicle.

They live in another state so we don't get to see each other often. How ever when my Grandma passed away they allowed us to spend the night at their house before the funeral. And a little over a year ago my Mom came to visit for two wonderful days where we enjoyed each others company to the fullest. Even while avoiding touchy subjects.

They still feel the occasional need to try to convince us how wrong our choice was to leave the Amish, but after they get that obligatory piece out of their system the rest of our visit can be very pleasant.
Posted by A Joyful Chaos at 11:40 AM 3 comments:

1.  This week marks the beginning of Lent...will you be giving something up or adding anything to your life during this season of the year?

No, I'm not planning to give anything up or add anything.  Instead we will be focusing on another item on our list of twelve monthly goals we made at the beginning of the year.

2. The day before Lent is Shrove Tuesday... tradition states you eat pancakes on this day. In some parts of the world Shrove Tuesday is actually known as 'pancake day'. How do you like your pancakes? Or don't you?

I can't stand using syrup on pancakes. I prefer using sausage gravy on them, and if that isn't available I pretend a pancake is a piece of bread and eat it with an egg.

3.  I'm sure there are many, but what's one love song you really love?

4.  What are some things you do to let others know you love them?

There are so many different ways to let others know you love them. To mention a few that come to mind right away are: cooking and baking, listening, forgiving, little acts of kindness.

5.  Roses...red, pink, or do you prefer another color? Can you recall the last time someone gave you flowers? Given your choice would you like to open the door and see a dozen red roses, a dozen purple tulips, or a dozen pink peonies?

I like red roses, but I really like the softness and warmth of pink roses. Given the choice of those three flowers I would choose a dozen red roses.

6.  President's Day will be celebrated in America next Monday. Does US Presidential history and trivia interest you?  Many Presidential homes are open to the public and offer guided tours...Monticello (Jefferson's home), Mount Vernon (Washington's home), Montpelier (James Madison's home), Hyde Park (FD Roosevelt's home) and The White House (home to the sitting President) to name just a few. Of those listed which would you be most interested in touring?  Why?

While I would enjoy touring the White House, I would really like to see Monticello. Virginia seems a lot more appealing to me than D.C.

7.  Are you good at keeping secrets?

I just finished printing out coloring pages to go with A New Home for Lily for Sunbeam.  If you haven't checked out The Adventures of Lily Lapp website yet, you may want to. Everything has been updated since book two has released. So many fun things to do there. 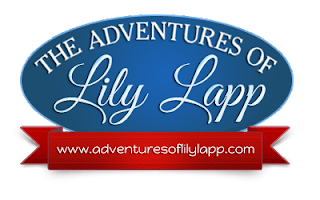 One thing I really enjoyed while writing the "Lily" books was how I was able to go down memory lane and write about my childhood. I missed writing about a lot of things here on my blog and I was able to write about them now without jumping out of the chronological order I had tried to maintain here.

Since book two, A New Home for Lily, has released I have talked to a lot of people and received emails from others how one chapter especially touched them where I had written about getting a real doll. (And yes, it really happened the way I wrote it.) 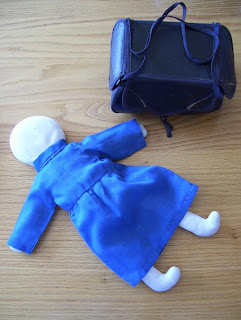 I always loved my rag doll, Sally and the little satchel Grandma Mast had made for her, but to me nothing was quite as special as a real store bought doll with real hands, feet, and best of all a real face. My friends all had real dolls and it was always fun playing with them when we visited at their house.

The little girl in me never really got over that desire for a real doll even though I grew out of dolls. I was reminded of that this morning when I saw Sunbeam's bed and her collection of dolls. I think all this time when I bought new dolls for the girl's birthdays and Christmas I was unconsciously going back to my own childhood desires. 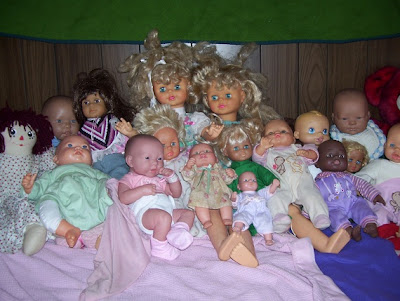 I do own something I really, really don't like at all. But at the same time I like it too much to throw it away.

It all started back when Sailor was five years old. He had a few quarters and he kept talking about going to buy something for Christmas. We decided to give Rosebud and him each a few dollars and they could go buy something for everyone in the family.

I can still see Sailor walking out of the store with a bag clutched in his hand positively beaming, and telling me I can't peek. LV helped him wrap it after we got home and the days leading up to Christmas Sailor was much more excited about the lumpy package he had bought for me than anything else on the growing pile of gifts.

On Christmas morning he stood beside me hardly able to contain his excitement as I opened his gift and found this: 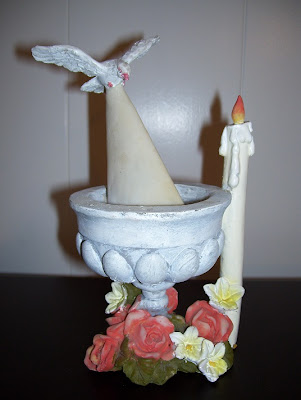 His eyes glowed with joy as he pointed out that this thing had roses, and a bird, and a candle. Three things that he knew I loved.
A hug and a thank-you and then the problem. Where will I keep this ugly thing? It has posed that same problem for eight years now. I love it because my little son carefully and thoughtfully chose it for me. But I don't like it, because it is really so, so ugly.
How did it ever manage to even get produced for sale is beyond my comprehension.
Posted by A Joyful Chaos at 9:25 AM 11 comments: