Our children love working in the kitchen. Sailor has a few things he enjoys making and Rosebud enjoys finding recipes and making them while Sunbeam helps along. Most of the time everything turns out great but the adventures of having young cooks in the kitchen wouldn't be complete without the occasional funny bloopers.

After a recent cooking disaster where they opted to not use a recipe and instead invent a new dish I had to think of some of the times when things I was making didn't turn out the way I wanted them to.

One of the first was a birthday cake I had made for Mom that turned out to be a disaster. There were many more instances of cooking failures. Like the time the flour paste was added to cold chicken broth to make gravy and when it didn't thicken more paste was made and added again and again. By the time the broth became hot enough to boil the paste suddenly decided to do it's job and there was nothing left except a big glob of disgusting dough instead of a nice gravy.

There was the awful Thanksgiving dinner I prepared for LV before we were married and then later I wanted to try out a new lemon pie recipe to serve on our date. It had a special meringue crust and the filling was looking delightfully silky. I was feeling pleased as I tasted the filling and it was delicious.

On Sunday evening when the usual time rolled around that we had a snack I went to the pantry and got the pie. I set it on the table and handed a knife to LV. When he cut it I was dismayed to find that it hadn't set at all. As a matter of fact it had become a lot thinner and now resembled a disgusting watery pudding. LV asked for a spoon and bravely helped himself to a bowl full and calmly ate it as if it was exactly the way it should have been.

Thankfully I have learned from my mistakes and cooking disasters hardly ever happen. And when ever the children serve something that didn't turn out right I have to smile as I eat it knowing that this is a part of the adventures of having young eager cooks in the kitchen. And I want to savor every moment of it! 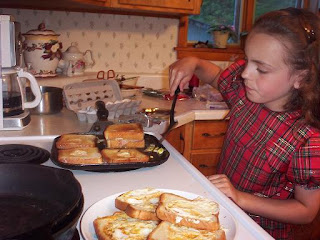