We really like cinnamon rolls and often enjoy pancakes too so when I heard of cinnamon roll pancakes I knew it was something I had to try.

They turned out to be absolutely delicious! 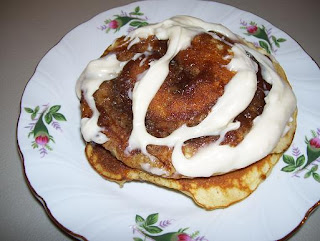 Combine all ingredients and mix well. Melt a little bit of butter or lightly coat a skillet with cooking spray. Heat skillet until it's just hot enough to make a droplet of water hiss and sputter when you drop it in the skillet. I use a ¼ cup measure to pour the batter into the pan and then add the cinnamon swirl.

Mix well. It works best if you make this before you make the pancake batter so that it has time to thicken. You will need to stir it every minute or so to make that the butter doesn't separate. Once you are ready to start frying the pancakes spoon this mixture into a Ziploc bag and then cut off a wee little corner. Right after you put your pancake batter into the skillet squeeze some of the cinnamon mixture on top in a swirling motion. 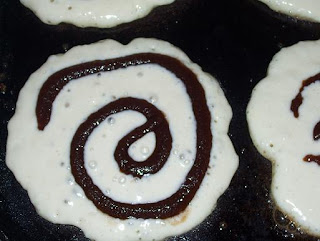 Proceed with the usual method of making pancakes. You will want to wipe the skillet between each batch since it gets syrupy and you don't want your pancakes to taste like burnt sugar.

Once you have fried your pancakes make a glaze to use on top instead of maple or pancake syrup.

Mix the first four ingredients well and then add a tsp of milk at a time until it reaches your desired consistency. Drizzle over your pancake and enjoy!
Posted by A Joyful Chaos at 8:12 AM