Another Kind Of Memories

On a whim, way back in July my husband thought having his own blog similar to mine would be something he would possibly enjoy, and created an account, dug up a few good old pictures and made one teeny tiny little post.

I was hoping he would post regularly because he has so many great memories that it's a shame to let them be forgotten. Like the time he thought he was being kidnapped. His many adventures that only a boy growing up on a farm could have. His summer spent in the woods as an Indian and many more.

I have given up hope that he will ever blog regularly and so I was pleasantly surprised when this one of a kind book appeared. 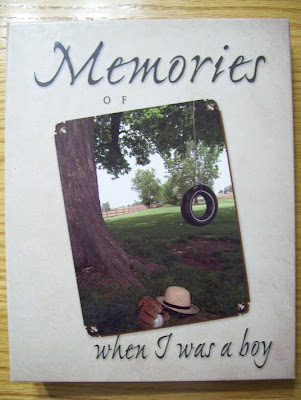 He says his memories are copyrighted, so unless enough people would want a glimpse of what he has to share there will only ever be this one book.