One afternoon in early fall John and I were playing in the sandbox when the phone rang. Mom came hurrying outside to the "phone shanty" to answer it. It was Grandpa saying they had just witnessed a strange sight. A small covered wagon drawn by a team of oxen, an old fashioned "different" buggy hitched to a big slow horse, a cow, and two people that looked as if they had stepped right out of the pages of a "Little House on the Prairie" book had just passed their farm along 14 A and turned up Crawford Road and if we watch we should be able to see them soon.
We all sat on the swing under our cedar trees and looked down the road to where Crawford Rd crossed our road. It wasn't long before a team of oxen appeared with a tall man and his wife and a black dog walking beside them. We could hardly believe our eyes. A covered wagon with a yellow chicken perched on the back, a cow and a horse and buggy that looked different from any buggy we had ever seen. Walking slowly along the road.
They soon disappeared out of sight and we went back to the house, wondering who they were and where they were going.

That evening when Daddy came home we told him all about it. Daddy said he saw smoke that appears as if someone would have a campfire and that they're probably camping along the road. So right after supper he asked Mom to wrap up some fresh homemade bread and we would all walk over to meet them.
They were camped in a field beside the road cooking supper in a cast iron pot they had dangling above the fire. When they saw us coming they came to welcome us and introduced themselves as John and Sue Coffer. They had spent years travelling across America in this fashion and finally decided to settle down somewhere and had just purchased a piece of land that had a lot of timber and also a few meadows but no buildings or a well. They were hoping to build a cabin and dig a well yet before winter.

Daddy offered to help, but Mr. Coffer turned it down wanting to do it all by themselves with a crosscut saw and an axe.
It wasn't long before the sound of an axe filled the days and their little cabin progressed nicely. After they had moved in the next thing to do was get a well dug. Mr. Coffer did accept help for this as someone needed to be on the ground to pull up full buckets of dirt and then let the empty bucket back down to be filled up again. It took quite a long time but once he struck water it was worth it!
John was intrigued with the whole pioneer thing and Mr. Coffer on one of their many visits to our house whittled a tiny yoke for him to play with his toy cows.
The Amish settlement in Dundee eventually failed, but Mr. Coffer still lives there, still living the pioneer lifestyle. 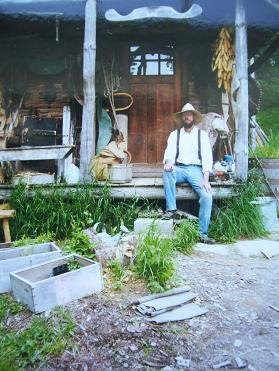 John Coffer sitting in front of his cabin. 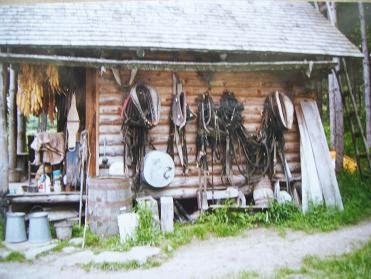 The side of his cabin also works as a place to hang the harnesses for his horses. 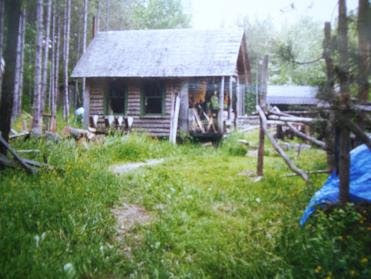 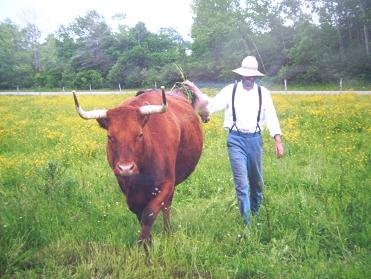 John Coffer with one of his beloved oxen.
Posted by A Joyful Chaos at 10:04 AM