1. What are two or three expectations you have of yourself?

2. In what way does your outdoor space need sprucing up this spring?

There is a section of picket fence that had been looking quite sad so we took it away last fall. We're wanting to get it replaced before long, and then hopefully plant some flowers in front of it.

3. According to this site (Roadtrippers), six of North America's most wondrous waterfalls are-Webster's Falls in Ontario, Upper Whitewater Falls in North Carolina, Havasu Falls in the Grand Canyon, Multnomah Falls in Oregon, The Lower Yellowstone Falls, and Niagara.  Have you seen any on the list? Which one on the list would you most like to visit? Prettiest waterfall not on the list that you've seen in person?

We've seen Niagara Falls multiple times already. I would like to see all the other falls as well. The prettiest falls I've seen in person that isn't on the list. That's hard. It could be a number of different ones, most of which I have no name for. I've always liked the one in Watkins Glen State Park. It's been a while since I saw it last, so maybe my childhood eyes thought it was greater than it is.

I suppose my favorite waterfall would have to be the one I see when ever I look out the window. 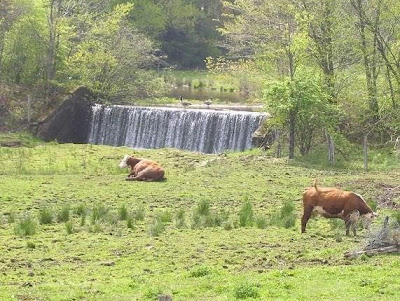 4. Looking back, what's something you wish you'd done as a teenager?

I don't have regrets involving stupid things I did as a teenager. Thankfully the setting and community I grew up in protected me from a lot of that, and I'm grateful.

There are a few things I wish I would have gotten to experience as a teen, one of them is being able to go out with LV, maybe get to eat at a restaurant or see a movie, or something. I was blissfully content at the time for the most part, though I always thought two weeks between dates was a long time!

5. Ham...yes please or no thank you? If you said yes please which of the following do you like best-baked ham with all the trimmings, a ham and cheese sandwich, prosciutto with melon, a ham biscuit, a bowl of split pea and ham soup, or a slice of pizza topped with ham and pineapple?

Yes, please! I like ham in all of the ways mentioned, but my favorite would have to be a baked ham with all the trimmings.

6. Are you typical of your generation? How so?

Not really. Somehow I don't feel like elaborating. Sorry.

7. April rolls in at the end of the week, and in keeping with that theme...'act the fool', 'nobody's fool' 'a fool's errand', 'could have fooled me'...which foolish idiom most recently applies to you?

Probably fools errand. Last night we were supposed to pick up a new stove and when we got there they said it was damaged and we couldn't get it after all. We ended up getting a different one, because you can't really cook and bake without a stove.

I'm here shivering in my fluffy housecoat. We went from lovely spring like weather complete with blooming daffodils and pretty blue skies, to a snappy 20º this morning. As much as I don't want to, a fire in the furnace seems to be necessary.
Posted by A Joyful Chaos at 8:21 AM