Due to popular demand; here is the recipe for the cannoli we made last week. 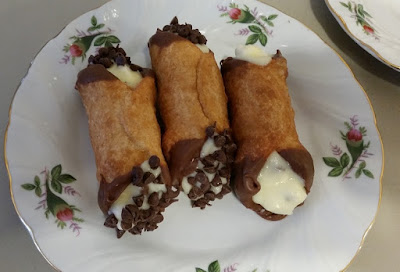 To start you want to make sure you have a few essential items on hand. 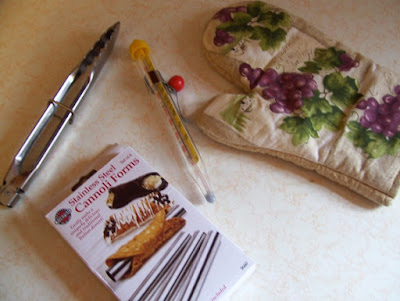 To make the pastry shell you will need:
2 cups flour
3 Tbsp Crisco
2 Tbsp sugar
¼ tsp. cinnamon
¾ cup Sherry
1 egg slightly beaten
In addition you will want:
Gently whisk together flour, sugar, and cinnamon. Add Crisco and mix until you have nice even crumbs. Drizzle a third of the Sherry over your flour mixture and mix it. Drizzle half of the remaining Sherry and mix some more. Finally add the slightly beaten egg and the remainder of the Sherry. Mix well, form into a ball, and refrigerate for about an hour and a half.
On a lightly floured surface roll out the dough until it is very thin, as in .... almost the thickness of a dime. Now comes the fun part. Cut out circles about four inches in diameter. I happened to have a cookie cutter that was the perfect size, but you can also make a pattern with parchment paper or cardboard from and empty cereal box and lay it on your rolled out dough and cut around it with a sharp knife.
Pour some vegetable oil into a sauce pan until it's about two inches deep. Heat it to 380º This is where it's important to have a candy thermometer.
While you are keeping an eye on the rising temperature of your oil, gently wrap one of your dough circles around a cannoli form. As tempting as it may be to wrap it around the middle, it is wise to situate it closer to one end than the other. Brush some beaten egg white on the edge of the dough where it will overlap and press to seal.
When the oil is hot slip into the oven mitt, take the tongs and firmly hold the end of the cannoli form and lower it into the hot oil. Hold it in the oil for exactly one minute. Remove and place to cool, on a wire rack that has been covered with paper towels. Repeat with your remaining forms. I had only four forms to work with, but by the time the fourth one was fried the first one was cool enough to remove from the cannoli shell and the steps repeated, wrap the dough, seal the dough, dip the dough in oil and fry. You will want to keep a careful eye on the temperature and adjust the heat as necessary. Since you're working with one cannoli at a time it's easy for the oil to overheat, and we wouldn't want it to catch on fire.

For the filling, I scoured numerous websites and cookbooks. Most of them wanted a ricotta based filling, but I was afraid LV wouldn't care for the texture. I was happy to find a recipe that told me to simply fill with our favorite vanilla custard pudding, which is what I did. I had it prepared and ready to be piped into the shells by spooning it into a Ziploc bag with the bottom corner snipped off.

When the shells were thoroughly cold I dipped some of their ends into melted chocolate, and left the others plain. I piped the pudding inside, and they were finally ready to serve.

It sounds complicated, but each step in itself is easy. And the end results are so worth it!
Posted by A Joyful Chaos at 3:27 PM