1. 'In like a lion, out like a lamb'...does the first part of this saying describing March weather ring true  where you live?


March came in like a lion, but quickly turned to a lamb, so it will be interesting to see how the rest of the month will be. 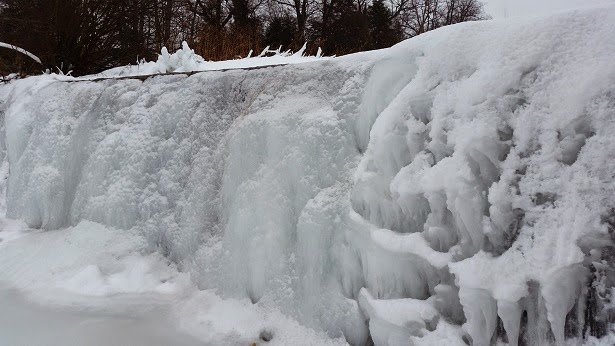 Our waterfall had been frozen solid, but right now it's seventy degrees warmer than it was a week ago. Going from -22º to 50º in such a short time is quite a change, and it's feeling too warm!

With all the melting snow and ice the creek is flooding. It's fun to watch as long as it doesn't get too close to the house.
2. March 4th is National Grammar Day. What common grammatical error bothers you the most?

Confusing there, their, and they're bugs me a lot.
3. William Arthur Ward says- 'The pessimist complains about the wind; the optimist expects it to change; the realist adjusts the sails.' Which one are you?

A combination of the three. I tend to adjust the sails, while complaining about the wind, and expecting it to change.
4. What's something you need to 'march forth and conquer' this month?

5. An ongoing debate around here...do you dust first, then vacuum or vacuum first, then dust? Of the two routine household chores, which do you dislike the least? How's that for wording?

Vacuum first, then dust. That way any dust kicked up by vacuuming gets to be taken care of. As a rule things don't get that dusty that I would be creating something that needs to be vacuumed after I dust.
6. According to thrilllist.com, the ten most photographed sites in the U.S.A. are- Cinderella's Castle in Orlando, Southernmost House in Key West Florida, The Space Needle in Seattle, The Site of the Boston Massacre in Boston, The Bellagio Lake/fountains in Las Vegas, The Lincoln Memorial in Washington DC, Coit Tower in San Fransisco, The Art Institute of Chicago, Niagara Falls, and snagging the number one spot-The Guggenheim Museum in New York City.

None of them. We have visited Niagara Falls a number of times, but before we had a camera.

7. Fifty years ago Monday (March 2, 1965) The Sound of Music premiered at the Rivoli Theatre in NYC. Have you seen the film? Do you own a copy? On a scale of 1-10 how much do you love it (or not)? Ten=best movie ever. If you're a fan, what's your favorite scene or song from the movie?

I have not seen The Sound of Music.
8. Insert your own random thought here.

March is always a fun month for us, with birthdays and a few special anniversaries of important events. Trying to make plans on how to celebrate each one properly.
Posted by A Joyful Chaos at 7:55 AM