Some of my earliest memories include buggies and the rides I had in them. I was only several years old when Daddy let me sit beside him on our open buggy to go somewhere. Part of the reason I remember this particular ride is because it was the first time I got to sit beside him instead of on his lap and I was feeling quite important.

The other reason is because I was wearing a brand new pair of boots that he had bought for me. They looked a lot like the ones he was wearing only much, much smaller. They were perfect! I kept admiring them and swinging my feet to see them better when all of a sudden one of them popped off my foot and landed on the road. Daddy had to stop and pick it up and then tucked both boots under the seat until we got home so it wouldn't happen again.

I have had rides in all sorts of buggies, the Lancaster cracker box style with their straight sides and not very much room on the seats. A variety of open buggies, the usual top buggies that aren't Lancaster style. I've been to places where they used only lanterns instead of lights, and they couldn't have storm fronts. I have seen yellow buggies, brown buggies, gray and black  but not until yesterday when we were ready to start for home after spending a little time in the Lancaster area have I ever seen or heard of a green buggy before.

There are a lot of Old Order also known as horse and buggy Mennonites in that area so I'm guessing this buggy may not have belonged to someone Amish. I had to take a picture though so you can see it too. 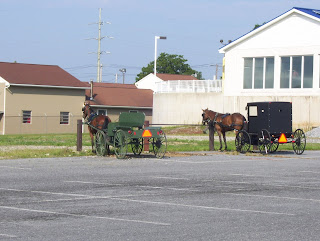