Yesterday Rosebud was wanting to try baking something all by herself. We haven't had dessert for quite a while already so I sat down with her and helped her choose a recipe that I thought she would be able to handle by herself. And other than having me take care of measuring the boiling water she did everything else on her own.

The cake is delicious and she is very pleased! 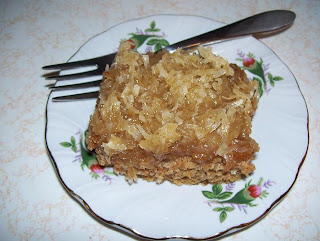 Measure oatmeal into a small bowl and pour boiling water over it. Set aside. In large mixing bowl combine softened butter and sugars. Mix well and add eggs one at a time mixing very well after each one. Blend in oatmeal mixture and vanilla. Add flour, baking soda and spices. Pour into greased and floured 9x13 cake pan. Bake at 350º for 30-35 minutes.

Combine and set aside until cake is done baking. Pour on top of cake and spread until nicely even. Pop cake back into oven for an additional two minutes.