Coming back home the next few days were a blur as we tried to get everything ready for moving day. Several big flatbeds came and were loaded with the farm machinery that we planned to take along. They left a few days before our actual moving day.

On the morning of moving day another long van trailer was backed up in front of the house to be loaded with all our household things as well as the things from our shop and our buggy would have to be hoisted on after everything else was loaded. My brother John and his wife came by early that morning to help us get started. LV's cousins and friends would come by a little later as well as my uncles and their families.

But before others arrived we were surprised to see David and his girlfriend come walking up the driveway. They had parked their vehicle somewhere out of sight and dressed in their Amish clothes to be a part of our day. Usually I would have been so very happy to have him come but the news of his having left the Amish was still too new and painful and our meeting was less than comfortable. But after others started showing up and I discovered his day was being miserable as people kept cornering him and preaching to him I actually strarted feeling really sorry for him and while I wished he would still be Amish the rest of his time there wasn't as strained between us and we were able to visit a little. David was still David even though he left the faith. He was still my brother and I realized I couldn't simply stop loving him or cut him out of our life. 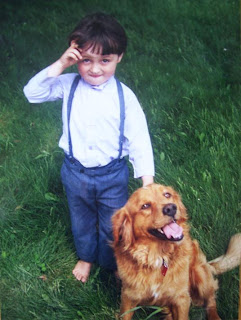 Sailor seemed overwhelmed with all the unusual activity and spent his day with his dog Kazan. The people who had bought our farm wanted to keep Kazan since he was already used to being around cows. We felt sad leaving him but thought it would be the best to let him stay with his familiar surroundings and knew he would be well taken care of. 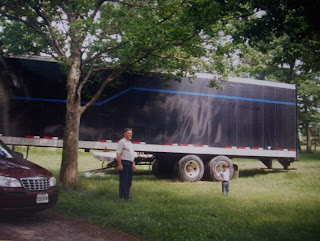 After everything was loaded our friends came by. They would be taking us to our new home. 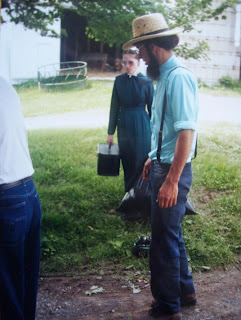 Late that afternoon our loaded truck pulled away and we loaded the last of our things into the back of the mini van. John and his wife helped load everything and stayed to see us off before going home. Waving good-bye we drove down the driveway. I couldn't make myself look back for one last look at what had been our happy home ever since I had moved in as a hopeful young bride.
Posted by A Joyful Chaos at 8:18 AM