Happenings Around the House and a Recipe

No matter the weather Sunbeam is found on the recliner occupied with one of her many things to pass the time while she recovers from her accident. She seems to be doing very well, not only in healing, but also in being sweetly content. 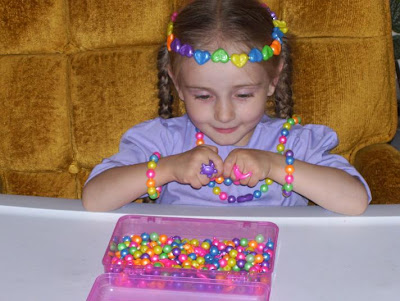 For the rest of us, the rainy weather requires us to make new plans for our day. Sailor was delighted to have Wags in the house even though he was required to stay on the rug inside the door. Wags was honored to be allowed to be inside and appeared to enjoy listening to the many stories Sailor told him. 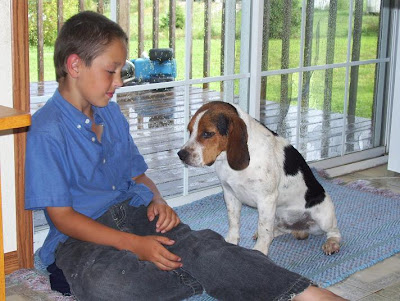 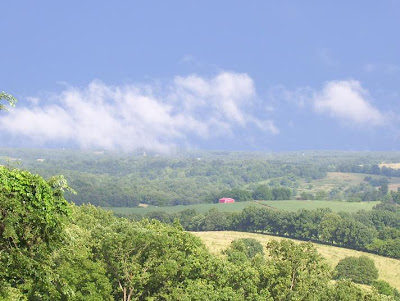 The rain finally stopped towards evening and as the last clouds scuttled away, we decided to go get some of the things we need that were in storage. After we got to the storage place we discovered that the boxes were getting soggy and there were lots of spiders everywhere, so we made a quick decision to bring everything home.
I have been trying to find room for everything, which is challenging. I suppose I'm too much of a pack rat, but so many of the things have sentimental value that I hate the thought of getting rid of them.
I still have a lot of unpacking to do, but took time to cook up a big meal last evening. Among the menu for the night was fried chicken.
This time I remembered to take a picture before we ate everything. 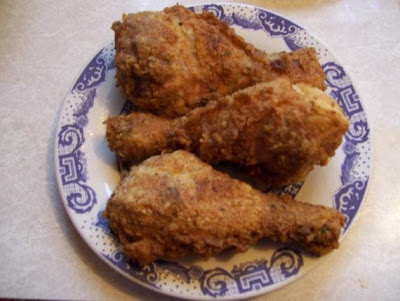 Have a saucepan or a deep skillet ready with vegetable oil heated to 350 and deep enough to cover at least half of the chicken. Carefully place your coated chicken pieces in the hot oil and fry until a delightful golden brown, turn over and fry the other side.
Preheat oven to 350 and have a pan ready lined with parchment paper, as the chicken comes out of the oil place them on the pan and place in oven for 20-30 minutes and up to 45 minutes if you have extra large pieces of chicken.
Since my husband would much rather have something along the beef line to eat rather than chicken. I made some Chicken Fried Steak for him.
I started with two large boneless steak and had them tenderized really well. I then cut them into pieces approximately 3"x3" I added 1/2 tsp sage and 1/2 tsp crushed rosemary to the mixture I had for the chicken. I then beat two eggs and added 1 tsp liquid hickory smoke and rolled the steak in the egg and into the seasoned flour mixture and fried it in the oil. There was no need to place these in the oven, they were done to perfection in the skillet.
With a seven layer salad, and mashed potatoes and gravy our meal was complete. 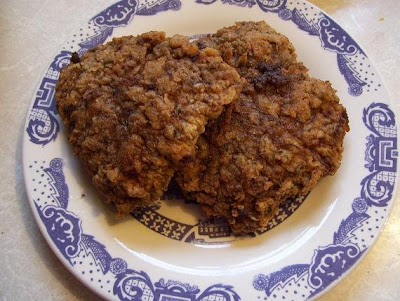 A few pieces of the Chicken Fried Steak before it disappeared.
Posted by A Joyful Chaos at 9:18 AM