As a child Saturdays were a day that I both looked forward to and dreaded.
We used to start the day off by thoroughly cleaning the whole house. Mom would give dusting cloths to John and me and we would dust everything we could reach. Then we'd each be given a wet sponge and we'd help Mom wash the windows, what fun it was seeing who could make their sponge squeak the loudest against the glass. After that Mom would let us sit in Daddy's recliner and look at picture books while she swept and mopped the floors. That used to be a real treat as it was the only day we were allowed to sit in Daddy's chair and the books also were saved for that event.
Once the floors were dry though the dreaded part came. It was time to do my hair. I had very long hair that were braided and put into a bun and once a week Mom would take them down, wash, and re braid them so they would be fresh and neat for Sunday.
We had a tall bar stool that we referred to as the "braiding chair." Mom would set it in the kitchen and call me and I would hop up on it. She had a shoebox full of special little toys I could play with while she did my hair. She would undo my braids and start brushing my hair. I would try not to cry, but after a week without anything done to them they always had lots of snarls and hurt dreadfully. She would sing funny little songs and tell stories to try to keep my mind off of the pain, but it was never long before I was howling. After the snarls were all out I would lay on the counter while Mom washed my hair and then I had to go through that dreadful brushing again and be braided. After she was done I would hop off the chair, put the box of toys away, and rejoice in the fact that it would be a whole week before I have to go through that again.
Now was when the real fun began. It was time to bake pie. John and I would each push a chair beside Mom and watch as she measured the flour and made the pie dough it was fun watching her roll it out and fit it carefully in the pan and then watch her fingers fairly fly around the edge leaving a trail of neat little braids , but the best part of all was when she was done with her pie and she would let me have the remaining dough to roll out.
I would carefully roll it out and then cut it into pieces and spread strawberry jam on it. Then Mom would roll them up and bake them for us until they were a nice golden brown. Then we'd have to wait until they cooled off a little before we could eat them. They were delicious and would almost melt in your mouth. The perfect ending to a Saturday! 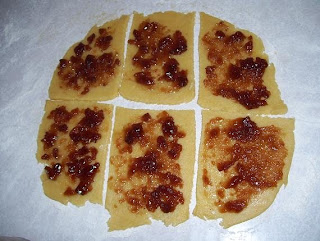 That is something I do with our children too. This was Rosebud's creation on Saturday. 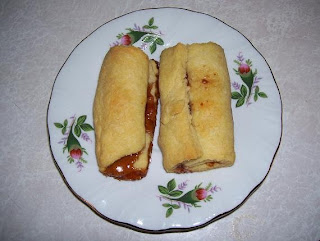 The children love them, but somewhere with the passing years I lost my craving for them . They don't taste quite as good as when I made them as a little girl.
And be assured there is no crying when we do hair. Since we do it everyday we don't have that problem.