Of Milk and More

This will be a follow up post from yesterday. After reading "Bethrusso's" comment my mind went back over all the things we used to do with our milk. And it made me wish there was some way I could have my own little Jersey cow.

Since two gallons of milk a day was way more than we could use for just drinking and cereals we had many other things we did with it too. After the milk had been in the refrigerator overnight Mom would carefully skim the cream off the top the next morning and save it and then once a week we would pour several quarts of cream into our butter churn. 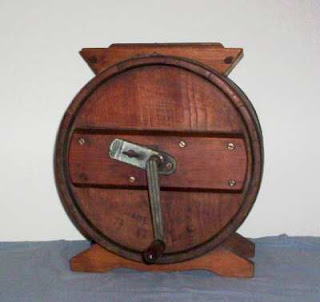 John and I would take turns cranking the handle, the paddles made a slap-slap noise as they hit the cream. After what seemed like a long time it would change it's sound to that of a soft slap of whipped cream, that was always a welcome sound that was soon followed with a loud slappity thump as balls of butter formed and hit the paddles.
Mom would strain off the buttermilk and save some for Daddy to drink and if she wanted some for baking later in the week she would set some aside for that too. She would then carefully lift out the chunks of butter and place them in a bowl and work it with a wooden spoon squeezing and pressing to get every little drop of buttermilk out of it possible and pour it away. Finally she'd rinse it in cold water and then work it some more. When she was satisfied that that every drop was squeezed out she would work in salt and then form into patties and place them in a Pyrex butter bowl and place it in the refrigerator.
We had several gallon milk souring at all times. Once it had reached the right consistency Mom would set our great big canner on the stove and dump it in and heat it to a certain temperature and then stir in half of a rennet tablet that had been dissolved in a little water. This caused the milk to set to a smooth soft texture. She would keep it at 90 degrees for an hour and then take a long knife and cut into half inch squares and then took her hand and scoop these long strings gently up and then let them back down until they were all uniform sized cubes. then she would drain off the whey and we'd be left with a big bowl full of delicious cheese curds. Often we would salt them and keep them to eat like that. Other times Mom would put them in her cheese press and press it for several days which resulted in a nice round block of cheese that could be sliced and eaten however you wanted.
She would also make cottage cheese, a spreading cheese, and yogurt. The yogurt we ate plain most of the time but occasionally she would flavor it with jello for a special treat.
The milk you buy in stores is pretty worthless when you think of all the possibilities of fresh milk. The process of pasteurizing ruins all that and basically strips many of the good things from milk.
I'm wondering now why we ever sold our cows. I'm really missing them right now.
Posted by A Joyful Chaos at 4:17 PM