A few weeks before we left the Amish some friends of ours took us to New Mexico where we had fun exploring the state for over a week.

One stop we made was at Four Corners, named thus because it was supposed to be where the corners of four states met. Several years ago we found out that the spot where they meet isn't where they had thought they do, so I guess that has now kind of defeated the purpose of making a stop there.

I'm not exactly sure what's wrong with me for sharing this picture with you today. It's quite cringe worthy. But here we are at Four Corners. 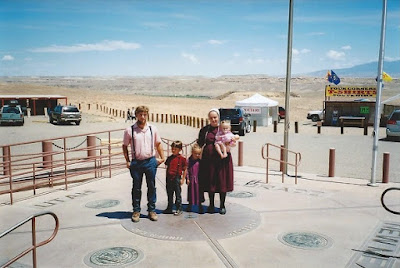