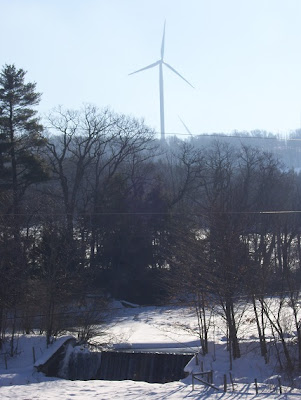 Ever since we moved into the house where we live now I have always enjoyed looking out the window and seeing the waterfall. When the weather was warm enough to have our windows open I enjoyed listening to the soothing sound of water rushing over the falls.
When they started putting up those windmills I wasn't enthused about having them nearby and when the first blades started poking up above the tree line I wasn't thrilled but it wasn't too bad since all we could see were the blades appearing and disappearing as they turned slowly. And then they plopped nine of them even closer where I have no choice of seeing them when ever I look out the window. Again I thought I'll probably get used to them someday.
They didn't have them spinning for quite a while, but that changed in the last several weeks. And my thinking I'll get used to them soon has changed also. Since they are in use they produce noise. The first time I stepped outside the house I was wondering how we can hear the traffic so clearly from the Interstate five miles away. Turns out I wasn't hearing the noise of traffic, but the noise of the windmills. Depending which way the wind is blowing the blades turn in a way that the sunlight reflects off of them and every turn throws splashes of blinding light at the house, giving me a headache.
A fan of these monstrosities, I am not.