By fall of our first year in Somerset County the meeting house in the Pocahontas area was completed and everyone was looking forward to having services there.

The finished meeting house was very similar to the other two that were being shared by the four other districts. Since the Amish only have church services every other week, one meeting house could easily be shared by two congregations.

The first meeting house had been built in 1881. The story behind it was that the coal miners used to show up after church to enjoy church dinner. It got to be overwhelming trying to feed all of them so the Amish decided to build a meeting house and have services there instead of in homes. It worked well and they wanted to keep everything the same throughout the Somerset County Amish therefore we got a meeting house too even though there hadn't been any hungry miners showing up for the past century. 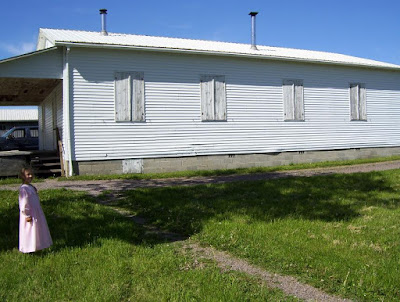 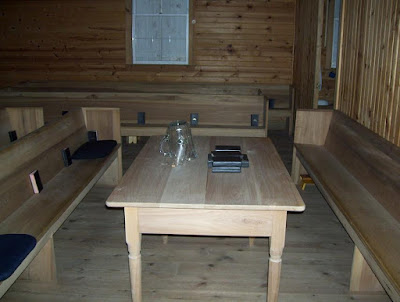 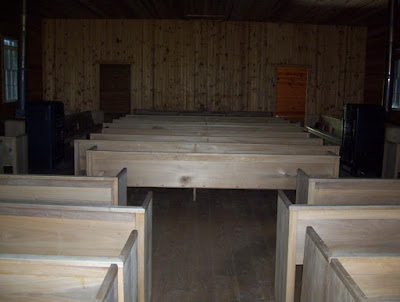 Standing at the back of the meeting house you can see the doorways for the two little rooms. The one on the right is where the ministers would go into for their meetings while the rest of the congregation sang the slow church songs. The men sat along the right side of the church house and the women on the left. 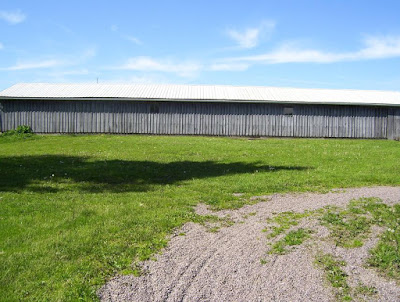 Part of the horse barn where horses were kept while services were being held. I'm not sure how many horses it could hold, but I do know it was a lot.
These humble buildings were the place where a lot of things would happen and milestones reached over the next twenty years, but for now I was happy to sit beside Mom and help sing the songs. It was nice to have a back to lean against instead of the backless benches we had been used to. I could see Daddy from where I was sitting. John and David sat beside him. I would listen intently to the sermons most of the time, although there was one preacher who when it was his turn to preach I would count all the knots in the boards on the walls and ceiling rather than try to figure out what he was trying to say. It was years before I found out that Daddy and Mom could never follow his ramblings either.
Posted by A Joyful Chaos at 7:29 AM