Our barn walls had cracks between every board and Daddy wanted to close them up before winter came. He bought a lot of 1 x 4's and started nailing them over the cracks. It made the barn resemble a cherry pie. With its red sides and the narrow white strips that were nailed over the cracks.

Daddy gave us children each a hammer and several nails to help nail the strips to the barn. It took several days to get it done since Daddy only worked on it in the evenings after he got home from work.

Once it was done it was nice and snug inside for our horse Jim, and Jenny the cow.

David was having problems with a hiatal hernia and some one had recommended using goat milk would help him, so Daddy built a pen to keep several milking goats. There was an elderly man in the neighborhood that enjoyed going to livestock auctions, Daddy asked him to buy several goats for us.

Several days later he drove up with two nannies and a billy. We put the nannies in the pen Daddy had built and tied the billy to a post until Daddy could build a pen for him too. John and I used to run home from school and go to the barn to feed the goats. It was fun letting them nibble grain and bits of hay from our hands.

One afternoon we were once again feeding the goats. I was bending over to gather bits of hay from the floor, when to my dismay the billy bumped into me. I wanted to quickly get out of his way but was horrified to discover that I couldn't because his horns had slid up inside the back of my coat. By now the billy wanted to get away from me as much as I wanted to get away from him. He was bleating loudly, but my cries were even louder as I dangled helplessly from his horns. I couldn't touch the floor with my feet or my hands as he swung his head wildly trying to get rid of the unwelcome burden.

John had run inside to get Mom and she hurried out to my rescue. She managed to open my coat and I tumbled to the floor as the billy goat hurried in the opposite direction still shaking his head and voicing his grievances. Mom checked to make sure that I was alright and then sat on a bale of hay and laughed. I had never seen her quite so amused before as she sat there rocking with laughter. I wasn't quite able to see what was so hilarious but seeing her laugh like that soon had us children laughing too as we headed for the house to prepare supper before Daddy got home from work.

Mom told Daddy all about it at the supper table that evening and everyone laughed again. But from that day forward the billy and I mutually avoided each other as much as possible. 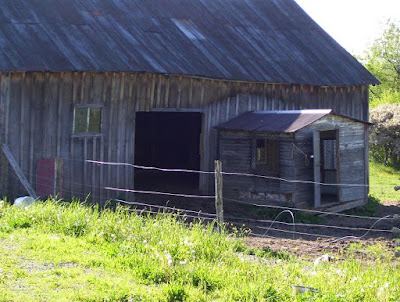 The barn looks forlorn and sad and very weather beaten 30+ years later. The new owners cut a hole in the side and moved my little playhouse to the side of the barn.
Posted by A Joyful Chaos at 9:03 AM