1. Are you watching the Olympics? Your favorite summer Olympic event? I read recently a list of the most iconic Olympic moments in history...what stands out in your mind as a great moment from some past summer Olympic games?

I'm checking in to see the medal count occasionally. I don't even know all the events that take place at a summer Olympics, so I probably shouldn't be picking a favorite. I have no idea what iconic moments happened in any past Olympic games.

I really liked the clip that has been circulating on Facebook of the U.S. divers saying that their identity is in Christ and they can rest in that.

3. The ball's in their court (tennis), cross the finish line (track and field), on target (archery), make a splash (diving), on a roll (gymnastics), out of one's depth (swimming)...which Olympic-related idiom best applies to your life right now? Explain.

The ball's in their court ..... for a number of different reasons. The one forefront in my mind is/was an important deal we were working on. Everything seemed to be on a roll, but somehow the ball became stuck in their court.

4. What have you earned a 'gold medal' in recently?

Hmmmm ...... the way I got our new school year off and running? The moments I stepped out of my comfort zone and did some things that I didn't really want to, but am glad I did because of all the memories that were created.

5. What is it (or who is it) that motivates you to eat right, exercise, and do what you can to be healthy?

Family .... I don't want my health to negatively impact the lives of those I love the most.

6. Are you young at heart or an old soul? Explain.

A mixture of both, perhaps?

I have a hard time of accepting the fact that I'm as old as the years claim I am. Which reminds me of a picture I've kept that Sunbeam drew for me several years ago. If you can't read it, it says ... I'm crazy about my Mom because she doesn't act her age. 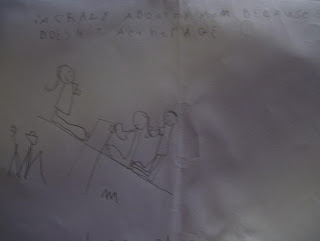 On the flip side there are many ways I could be considered an old soul.
7. It's National S'mores Day (August 10th)...are you a fan? Will you celebrate with a s'more today?

I've only ever had S'mores once. I really liked them, but not enough that I'm tempted to build a campfire to make more.

No, I won't be celebrating with one today.

I'm nursing a painful sunburn right now. I thought I had applied sunscreen really well, but I missed my left shoulder. Ouch!
Posted by A Joyful Chaos at 6:32 AM