As a child, donut making day was always a big deal. We didn't have them very often, but when there was an auction or some type of community fund raiser there was always a donut making station that I enjoyed watching.  Usually a group of children would gather to watch the donuts drop into the giant pots of hot oil and bob up sizzling and beautifully golden brown. Most of the time it didn't take very long before a mother took pity on all the "hungry" watching children and gave each of us a delightfully soft, warm donut, all sticky from the glaze it had been dipped into, before shooing us out of the way.
I've made donuts occasionally, but have never liked the after taste that comes from deep frying them. So when Rosebud discovered a recipe for baked donuts we knew we had to give them a try, and OH MY!! They turned out so, so good! Soft, chewy, and utterly delicious without any of that deep fried after taste. 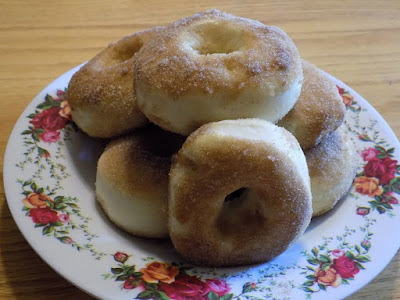 In a large bowl, measure in warm milk and stir in yeast and sugar. Add the butter and stir until mostly melted. Lightly beat the eggs and add them to the milk mixture  Next add the flour and salt. Beat the dough with a wooden spoon and eventually your hands if needed add a few more tablespoons of flour. The dough should pull away from the sides of the bowl and be very soft and smooth but still slightly sticky - don't overflour! Knead the dough for a few minutes and then transfer it to a lightly greased bowl. Cover and allow to rise for about an hour or until it has doubled in size.

Punch down the dough and roll it out to about ½ inch thickness on a lightly floured counter. Using a doughnut cutter or a 2-3 inch circle cookie cutter, cut out circles in the dough. Place the circles on a parchment paper lined baking sheet and stamp out the smaller inner circles using a smaller cutter. Be sure to make the holes large enough that as the doughnuts rise again and bake, they don't fill in the doughnut hole with the puffiness of the dough. Cover them and allow them to rise for about another 45 minutes, until they are puffed and nearly doubled.

You can take all the donut holes and mush them together and roll them out to make more donuts, or you can bake them as they are to make delightful bite sized treats.

Bake in a 375º oven until the bottoms are just golden, 8 to 10 minutes. Start checking them  around minute 8. They should still be pale on top, not golden and browned, and just barely baked through.

Remove them from the oven and let cool for 1-2 minutes. Dip each one in the melted butter and toss or sprinkle with the cinnamon and sugar. Absolutely delicious while still warm.

If you don't want a cinnamon sugar topping you can omit it and go for a plain glaze, a chocolate ganache, or any other type or flavor of icing you desire.
Posted by A Joyful Chaos at 7:36 AM