1. What's your worst food memory?  How about one of your best?

My worst food memory happened only a few weeks after we got married and were living in three rooms in the upstairs of LV's parents' big farm house. They were supposed to be moving to Missouri the next week, but until then I felt as if I was coming across as a scatter brained ninny and was making more stupid little mistakes than any other time in my life.

I had decided to make beef and cheese stuffed pastry pockets for our supper. I happily rolled out the dough, filled it with the beef mixture, and lined a dozen perfect half moon shaped pockets on my brand new Teflon coated cookie sheet before popping them into the cute little oven I had to use.

LV came in from finishing up the chores, and I proudly presented a platter filled with golden brown pockets. We sat down to eat, and what a disappointment! They tasted absolutely awful, exactly like I would imagine Teflon would taste if I tried to eat it. There was no way we were going to be able to eat them.

LV came up with a bright idea. Teddy, our dog, was lying under a tree. He opened a window, whistled for him and dumped the entire platter of pockets outside for the dog to eat. He assured me with his parents visiting friends that it would be dark by the time they got home so even if Teddy hadn't eaten all of them that they wouldn't be able to see anything, and by morning they would surely all have disappeared.

The next morning on my way into the house after getting done with the milking I was horrified to see every last one of those pockets piled right outside his parents bedroom window. I got down on my hands and knees and quickly gathered them all up and took them out to the barn and tossed them on the manure spreader where they belonged. Traumatized enough to vow never to make those beef pockets again.

My favorite food memory was the day our wedding cake was created. I'll tell you all about it later this week.

2. Do you appreciate people telling it like it is, or would you rather a speaker temper his/her words and maybe beat around the bush a little?  How about when you're the one communicating...which type are you?

There is a difference between constructive criticism and simply being mean. I always like to know how to do things better however I really don't like telling someone else things that I'm afraid they could take the wrong way.

3. What's your favorite place to hang out?

That's simple. Home! My favorite place in the world.

4. When do you most feel like you're a slave to time?

Somehow Monday always feels as if there simply wasn't enough time. The house is always needs to be cleaned since its at its very messiest after a lazy Sunday, there is a weeks worth of laundry to be done, Buddy is always a little crankier, and even though there doen't seem to be enough time, it's the one day bedtime can't come fast enough.

5. What was the last concert you attended?  Who'd you go with? Was it any good?

I've never been to an actual concert. There have been groups that came to our church to sing. The Downings were probably our favorite, but I can only take so much bluegrass before I don't want to hear it for a while.

6. Reality TV...harmful or harmless?  What's your guilty pleasure when it comes to reality TV?

Some reality shows are more harmful than others. We enjoy Duck Dynasty, something I never thought possible because of all those long beards, but after actually watching an episode we were officially hooked.

I really like cooking shows too. Chopped and Master Chef being my favorite.

7. What's something you think is overrated?

One little word. Sports. I'll leave it at that. 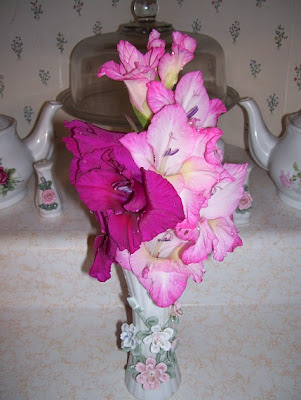 Last year some insects got into my flowers and most of them didn't make it. This year we have baby kittens and the amount of destruction they have caused to my gladolius bed is frustrating. I did manage to salvage one little bouquet.
Posted by A Joyful Chaos at 7:29 AM