We often kept granola on hand while I was growing up. Most of the time a small bowl full was used as an after school snack. Occasionally during the summer we would have it for breakfast, but not very often since my parents thought hot cereal such as oatmeal was much more healthy and energizing.

After we got married, both LV and I thought we had enough oatmeal while growing up and granola became our version of healthy cereal. Thankfully, we all love it. 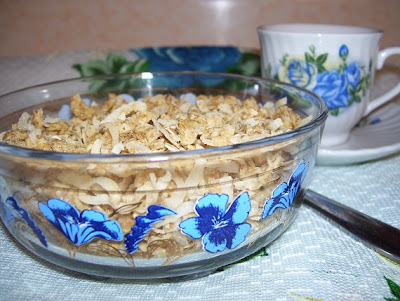 In a large bowl mix oatmeal, coconut, wheat germ, sugar, and salt. In a small saucepan melt butter. Once melted remove from heat and add vanilla. Pour over dry ingredients and mix well. Spread a layer onto a cookie sheet or cake pan and bake at 225º stirring every ten minutes until it has been toasted a nice golden brown. (About an hour) Cool and store in a tightly covered container.

This is a base recipe. You can always add nuts, sunflower seeds, and dried fruits for a nice variety. We prefer not to add anything to ours.