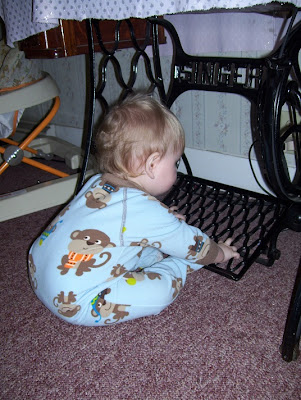 As a little girl I used to love playing with the treadle of Mom's sewing machine. My brother's and I could spend hours sitting on the floor in front of it, pumping it up and down, pretending to be doing all sorts of things.

Our children have enjoyed playing with it too. Sailor and Rosebud have grown out of that phase and Sunbeam is at the verge of doing the same. She still plays with it occasionally, but bigger and bigger chunks of time pass between her taking a few minutes to play there.

Last week Buddy discovered the treadle and it seems to hold a big attraction for him. He scoots over to it and tries his best to pump it. So far his efforts only pay off a small percentage of the time, but he keeps trying.

I still love my treadle sewing machine and don't see me ever making the transition to an electric model. Not only do I like using it to sew, I'm also happy how the children have been able to get the same enjoyment out of it that I used to as a little Amish girl.
Posted by A Joyful Chaos at 10:59 AM