After my unintentional break from blogging, thanks to several days without internet service and then dealing with a nasty flu virus, I'm back and ready to go.

The girls are still sick, but they're so much easier to care for than Buddy was. He wanted to be held constantly and by no one but me.

I had stopped making New Year's resolutions a long time ago. Maybe it was the goals I set that were too unrealistic, and then the feeling of failure and disappointment when I realized that I had broken them usually within the first few days that made me decide not to make any more.

Rosebud was enthused about making some New Year's resolutions and as we were discussing them we decided to make resolutions that involved the whole family. This year we are taking a slightly different approach and we're creating a list of twelve things we would like to do in 2013. The idea was to pick one thing off the list each month and concentrate on it. 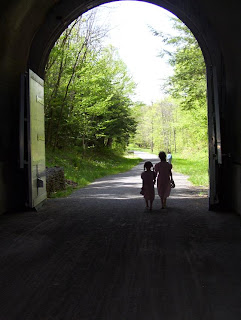 January we'll be trying a new recipe every day. Another month we want to walk to the tunnel on a nearby hiking trail at least twice a week. Someone else chose for us to sing several songs every night before we go to bed.

For the first time ever I'm actually looking forward to achieving everything on our list, and having a lot of fun while doing so.
Posted by A Joyful Chaos at 9:12 AM