Spiders hold the number three spot on the list of things I abhor. So far only snakes and mice are worse than spiders.

Lately there seem to be a lot of those little hairy black spiders around. They seem to move at unmatched speeds but even so I have been successfully working at diminishing their population in our house.

This morning I was changing Buddy and the children were playing peek-a-boo with him at the same time. When all of a sudden Sailor exclaimed there is a huge black spider on Buddy. I managed to hang onto Buddy while I flicked the spider off and tried to stifle a scream while Sailor dissolved into a heap of laughter. 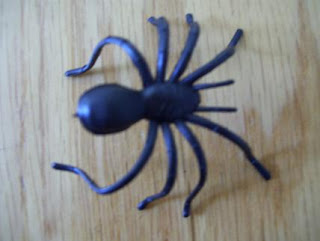 From somewhere he had found this plastic spider and managed to put in on Buddy's onesie without me seeing him do it.
After a scare like that the girls and I are still trying to plot revenge. I think it might be making an appearance in a sandwich sometime in the future if I can make myself touch it.
Posted by A Joyful Chaos at 12:58 PM

Email ThisBlogThis!Share to TwitterShare to FacebookShare to Pinterest
Labels: Children