So far I have never had a pumpkin pie that I didn't like, but there is one that stands out above the rest. It may be a little more time comsuming to make but the end results are so worth it! It used to be one of our favorite pie while I was growing up. It even made it's way into the books I'm writing, in an unforgettable incident which I'm sure you will enjoy reading about later

With Thanksgiving knocking on the door it's the perfect time of year to make some. I was feeling overly ambitious on Saturday and actually managed to make these pie and then sought out my usual corner to rest and congratulate myself at my accomplishment. I think I understand now why my mother was so pleased with herself for baking 13 pie a few weeks before one of my brothers was born. And though I only made three it still felt like a major accomplishment! 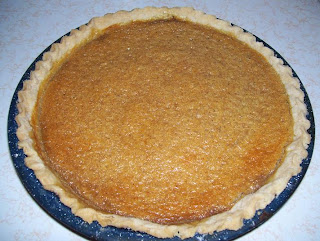 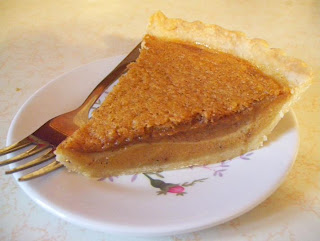 In a large bowl combine pumpkin, sugars, spices, salt, and flou. Mix well. Separate the eggs. Reserve the whites in a small bowl and add the yolks to your pumpkin mixture. Mix well. Add milk and mix again.  Now beat the egg whites until they form soft peaks. Fold evenly into pumpkin mixture. Divide into three 9 or 10 inch unbaked pie crusts. I prefer using this recipe to make the crusts.

Delicious!
Posted by A Joyful Chaos at 10:05 AM