Flowers on our Farm

Our farm had an abundance of flowerbeds that needed to be cared for and I was experiencing first hand how very much work it took to have the nicest farm in the county. There was a long flowerbed along the entire length of the shop that was filled with red and pink geraniums against a pack ground of taller flowers. Along the end on the shop was another flowerbed, this one filled with tulips, crocus, daffodils and other spring flowers. Both side of the walks leading to the big farmhouse had large flowerbeds, another long one looked pretty in front of the porch. Smaller flowerbeds were on each side of the chimney as well as both sides of the front basement door.

We had a circle drive. In the middle we had what we used to refer to as the island, which had a large oak tree, our hitching rack, and you guessed it another flower bed in the center.

The last flower bed was in front of the barn. Besides the regular flowers it also had two rose bushes. I especially liked those roses. The one bush produced beautiful large yellow roses, and had several sections that had the most delightful pink and yellow tinged roses. The other bush had several different types as well.  I was thrilled to learn that LV as a little boy had been intrigued with grafting and had grafted different kinds of roses into those two bushes which were now thriving with the most unique blend of colors and beauty. 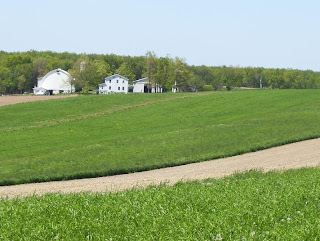 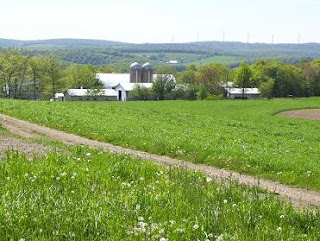 We may no longer live there but this will always be "our" farm.
Posted by A Joyful Chaos at 8:00 AM