John and I were excited about starting back to school. The summer had been both busy and fun. We had spent a lot of time in pinching off all the blossoms from the strawberry plants. That took a long time since we had an acre to cover and they bloomed profusely. The new garden had a lot of stones that we had to pick up and pile on the wheelbarrow for Daddy to dump once he got home from work.

Daddy piled all the stones beside the barn for future use. Once he had more time he would take one by one and smash them with his sledge hammer to make gravel for the driveway in the barnyard.

School started with everyone saying the Lord's Prayer and singing three songs. As soon as that was done we got our arithmetic assignments. The forenoon passed quickly and it was time for lunch. Mom had fixed an egg sandwich and a small bowl of peaches for our lunch. I closed my lunch box as I was eating my sandwich so I could admire the picture on the front. LV  was sitting across the aisle and happened to see what it said and called out to one of his friends "Hey Norman, MaryAnn's lunch box says Herself the Elf Elf fun is for everyone." Everyone laughed as I cringed in my seat and wished I could disappear.

I hurriedly finished my lunch and ran outside. I was still in the entrance when LV and some of the other boys came out and gathered around me chanting elf elf elf Herself the elf. I felt like crying and managed to get away and run to the girls outhouse where I vowed to stay inside until recess was over. 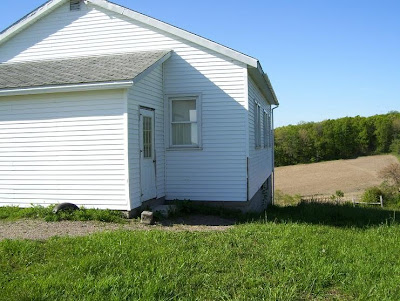 20+ years later the schoolhouse no longer looks new and exciting. But it is holding lots of memories! 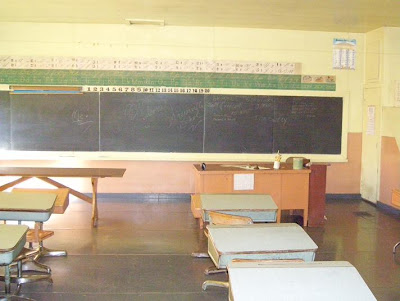 The inside of the school house.
Posted by A Joyful Chaos at 5:00 PM