We just got done with a four day weekend that we took to drive to Pennsylvania. Since our vehicle doesn't really have room for luggage we try to travel as lightly as possible.

We got everything tucked in as good as we could and started off. We planned on stopping in Indiana for the night at a friends house. So we took the northern and most boring route. Since we all enjoy traveling we kept our eyes open for anything we could find that is odd, or happens to strike our funny bone. It didn't take long at all. First up was an elderly couple sitting on lawn chairs in the middle of a pasture along 63 each holding a rope so their horses can graze.

And before long we caught up with 9 bikers out enjoying their Harley's. Trust me there were nine of them. I counted them as they rounded a curve in front of us then again as they went up a hill, and again around the next curve. You get the picture.... Once I start counting something I can't stop. And so I counted them over and over and over again until they finally pulled off at a gas station.

Going through St. Louis the children wanted to stop at the arch, but since we had already rode to the top of it once we kept on going. We had to contend with a lot of road construction which slowed us down and really heavy rain through Illinois and Indiana. We were amazed at how many people travel with their dogs. In one 6 mile stretch of road construction there was no fewer than five vehicles stopped with a dog that needed to get outside and it's owner waiting rather impatiently with an umbrella until they could continue on their way safely.

At the Indiana, Kentucky line we saw a field with hundreds of barrels that were converted into rooster hutches. Each with a rooster tied to it by it's leg. We are still puzzling over the sight. What is the purpose of raising them like that and what will they do with them?

We enjoyed our visit with our friends in Indiana and then headed on to Pennsylvania, back to the beautiful Appalachian mountains. 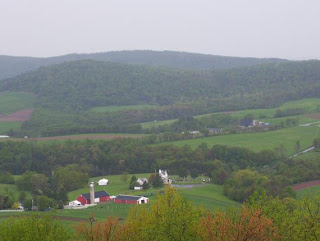 We met with the guy that wanted us to come in and see his farm and then drove around the old familiar roads. We wanted to fuel up again and went to the nearest town, but their gas station had closed and the other was under construction and the only one that was open didn't have diesel so we headed for the next town only to discover there is no diesel there either our low fuel light came on and we were getting desperate, we ended up going clear to Fuel City (a place with nothing but truck stops and fuel stations) I had forgotten how almost nobody back there drives diesel vehicles.
We stopped at one of the shopping centers and stocked up on Snyder Cheese Curls, which in our humble opinion are the best in the U.S. and unfortunately can only be bought in the east. I thoroughly enjoyed the vast quantity and quality of businesses and stores once again. Things I used to take for granted before we moved to the middle of nowhere.
We then headed for my husbands cousin where we stayed for two nights. It is impossible to not enjoy your stay there. We all enjoyed it very much, but early Monday morning we started for home taking the southern route. 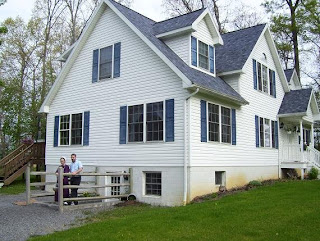 Once we left the mountains behind things got boring and since we wanted to drive home without stopping for anything except to fuel up, it got tiresome and we started getting goofy. We have approximately two hundred pictures to prove it. Everything from my husbands Hillstrand brothers impersonation to some of us waving at whoever passed us and lots of other things too. I'll have to go through all of them and delete the majority. 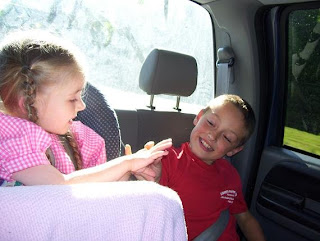 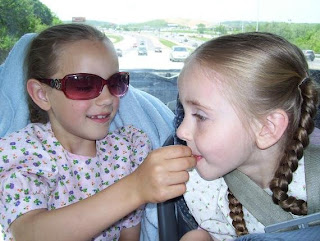