Last spring Sailor became the happy owner of one of the sweetest and most loyal little Beagles I had ever met. He named him Jack and spent hours with him every day roaming our land. A few months later someone abandoned another Beagle at the end of our driveway. Jack made her feel right at home and Sailor gave her a name. Jack and Jill were one happy couple. Last fall they had six little puppies.
Sailor spent all of his free moments with them, and grieved every time one of them found a new home. Finally there was only one puppy left. He had named him Waggy Tail but we called him Wags for short. We found a place for Jill too, that left only Wags and his daddy, Jack. And then Jack disappeared for several weeks we were afraid something bad might have happened and then one morning when Sailor was outside playing with Wags they heard a strange noise. It was Jack minus his eyes sniffing his way back home to his beloved Sailor.
The tears that flowed then! The children sobbed and petted and cried and hugged that poor little dog, his head looked terrible as there was obvious infection too.
The vet couldn't do anything and we were left with only one option. They call it humane. We called it heartbreaking!
We were very glad we still had not found a home for Wags. He really helped Sailor to not hurt as badly as he would have otherwise. 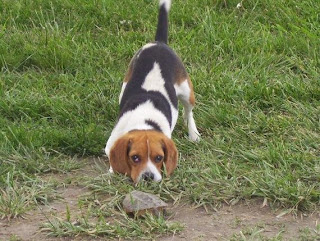 Jack inspecting a turtle that came wandering along. 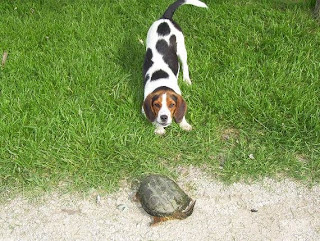 And exactly one year later Wags is telling a turtle exactly what he thinks. 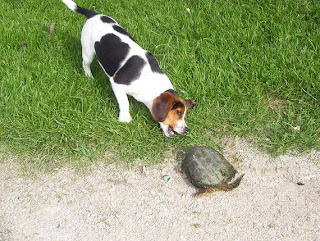 He got right up in his face, and put all his vocal energy into his message of no trespassing on his guard. The snapper finally got tired of it and snapped him. 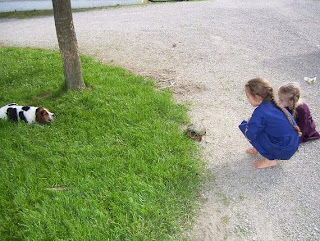 Wags retreated to a safer distance to voice his grievances. In the meantime the girls got a little closer for a better look.
Posted by A Joyful Chaos at 7:42 AM