It's been a week now since I picked up the phone to LV telling me he's been hurt and is on the way to the hospital.
He has a shattered heel as well as multiple fractures in his ankle bones.
He's at home with orders to keep his leg elevated while we wait for swelling to go down enough that they can do surgery to try and piece everything back together.
Having him laid up has shown us how much we take for granted when everything is going well, and also how our house is not handicap friendly - not even a little bit. It has added layers of challenges as I try to care for him to the best of my ability.
~~~~~
LV has been studying Spanish on Duolingo while he's laid up. I thought I tune most of it out, but then I woke in the middle of the night with the words yo bebo, tú bebes, él bebe running through my mind, which leads me to believe my tuning it all out has not been all that successful.
Maybe I should take up studying Spanish as well
~~~~~
Usually when ever I buy avocados I carefully select the ones that seem to be ripe enough to eat, but not mushy. Sometimes my only options are firmer than I would like. I bring them home and wait semi patiently for them to ripen, in hopes that at least one of them will be ready to eat before next weeks shopping trip.
About a month ago I got half a dozen that were still much too hard to eat. I brought them home, but with no room in the produce drawer in the refrigerator I put them in the fruit bowl on the counter top along with the apples that were already there.
Much to my surprise, the next morning they were the perfect ripeness to eat.
I would have to experiment with this!
The next time I bought hard avocados. Some I placed in with apples. The others I simply placed on the counter top. The ones with the apples again ripened overnight.
I was thrilled! Finally I had found something to perfectly ripen an avocado in a relatively short amount of time. Once they reached the desired ripeness I put them in the fridge to keep them from over ripening, and enjoyed lovely avocados all week long.
I felt like something of a scientist inventor until I did a quick internet search and saw that storing them with apples has been a ripening method for ages already and I had simply been behind times. Sigh ... there went my feeling like a genius.
~~~~~
It's that time of year again when walking up and down the front porch stairs is like walking through a tunnel of beauty. 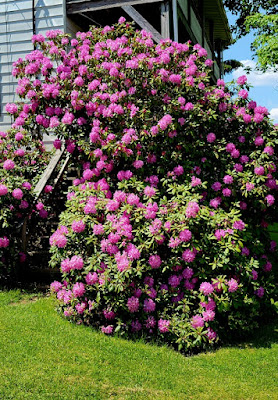 The bush doesn't bloom very long, but I fully enjoy it as long as it lasts.
~~~~~
Sharon tried her hand at making miniature three layer lunch box cakes. I thought they turned out delightful. 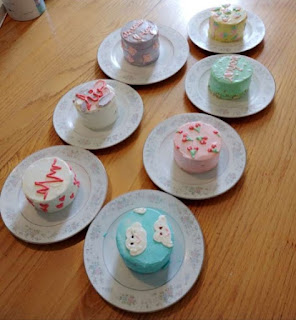 The flavors she chose were delicious as well.
I love seeing their creativity in the kitchen. Being able to taste it is a fun added bonus.
~~~~~
On top of next week's shopping list is the word - clock.
The other evening as I was cooking supper the kitchen clock randomly popped off the wall and came crashing down startling all of us.
I feel there's a whole assortment of puns available to describe this happening, but I'm too tired to think of anything beyond "time flies when you're having fun."
Posted by A Joyful Chaos at 2:57 PM