My Journey with Weight

"Skinny mini fishy tail. Skinny mini fishy tail," the gleeful chant of the schoolboys sounded in the air as I cowered in the corner of the schoolroom. I looked desperately for an escape route but my last bit of fleeing had led me to this corner where I was now trapped.
"Skinny mini fishy tail, Skinny mini fishy tail" the chant continued.
"Boys! Leave her alone!" the blessed voice of my teacher commanded.
They dispersed and I went to the book shelves to find a book to read the rest of the recess. The chant still echoing in my head.
I hated being skinny. Not just skinny, but painfully skinny. As a nine year old, I started praying that God would make me fat. That prayer continued for several years.
Skinny was replaced by slender in my teenage years, but over the years that changed. I'm not blaming God for answering the silly little prayer of a young girl and making me fat, but with more years came more and more weight.
For the past fifteen years I tried a lot of different diets and things to try to change that. I would lose a few pounds, but then they'd come roaring back bringing some friends with them.
I tried the grapefruit diet, the cabbage soup diet, you name it I tried it. All with similar results. And the numbers on the scales kept creeping upward.
I tried intermittent fasting. I gave myself a month where I ate only one meal a day, and that meal I only ate the same amount I would have eaten for that meal had I been eating three meals a day. At the end of the month I stepped on the scale and was horrified to see not only had I not lost anything, but I had actually gained over ten pounds. In what universe is that fair?
No longer was anyone chanting skinny mini fishy tail at me, but now I would get the occasional message on Facebook from someone selling Plexus, ItWorks, and some other things that  they thought I should take to try to lose weight. It made me feel the same way I did all those years ago being bullied for the way I looked in school.
I tried Trim Healthy Mama, I actually did lose some weight on it, but it messed up some other areas of my health so I had to quit.
But then last year I happened to discover a book at the library. 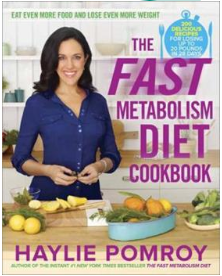 I read it, looked at the recipes, and decided to give it a go. It has changed my life! It's finally something that actually works for my body.
The plan was to restart my metabolism by following her food recommendations for four weeks, and then every three months after that do a tune up for a week or two.
I faithfully followed her recommendations on what foods to eat, and when. It was the most undiet-like diet I have ever tried. I never felt deprived or as if I was missing out on good food. The recipes I tried were delicious, and I made my own as well by simply using the accepted ingredient list for the day.
Even during the time I'm not on this food plan my reset metabolism keeps the weight steadily trending downward, while I eat absolutely anything and everything.
I'm doing a tune up again this week.
My breakfast this morning consisted of spicy rice patties and an apple. To make the rice patties I cooked one cup of brown rice in four cups of chicken broth yesterday and tucked it in the fridge. This morning I used one cup of the precooked rice, added two egg whites, several tablespoons of minced onion and almost a teaspoon of red pepper flakes and then fried them (without butter or oil) until golden brown. I happen to really like these. Tomorrow morning I'll have them again. Wednesday and Thursday I have a different breakfast that includes smoked salmon which is always a treat for me, Friday, Saturday, and Sunday mornings I'll have a sandwich with toasted bread, four strips of turkey bacon, a fried egg, an avocado, and if I'm in the mood some sliced tomato. All three breakfast menus are completely delicious! They don't even feel like a diet.
I have lost over fifty pounds so far, and am feeling great! I'm not at my goal weight yet, but it no longer looks impossible. I'm so happy I finally found something that works for me, and plan to continue doing the tune up weeks until I reach my goal. and very likely even beyond. I enjoy living with a metabolism that actually works.
Edit to add: A friend on Facebook shared that those with ulcerative colitis or a gastro type condition may not want to follow the plan in this book.