1. What's surprised you most about your life, or about life in general?

When I look at what life used to be, and how different it is now from anything I ever imagined while growing up there is plenty there to be surprised at, but it all happened at a rate that there was never really an element of surprise involved..

2. Among others, these ten words were added to the Oxford English Dictionary this year...awesomesauce, beer o'clock, brain fart, buttdial, cat cafe (apparently this is a real thing), fatberg (gross-read the definition here), fat shame, hangry, Mx (gender neutral), and skippable.

Of all those dreadful choices I think skippable is probably the word that has the most chance getting used.

I can't see why any of them deserve to be added to the dictionary.

3. Do you like gravy? Is there a food you'd rather not eat unless it comes with gravy? Do you make your own or buy the canned or store-made variety? Turkey and gravy, sausage gravy, mashed potatoes and gravy, country ham and red eye gravy, biscuits and chocolate gravy, pot roast and gravy...which one on the list is your favorite?

I like gravy though there isn't any food that I think I have to have gravy in order to eat it, including mashed potatoes.

I make our own gravy. Most recently I made what we used to call "white gravy" when I was growing up. It's a cold gravy, one vegetarians could eat. We used to serve it every day during the summer. It was especially delicious over fried potatoes which is how we ate it last week. The children love it just as much as I used to.

Biscuits and gravy sound good right now, though not with chocolate gravy. I didn't even know something like that existed.

4. Do you have a plan? Do you need a plan? Have you ever had a plan fall into a trillion pieces? Explain.

I have all sorts of plans. At the moment I don't need any more plans, I just need to stick to the ones I already have.

Sadly we have had some plans fall into pieces.

5. November 19 is National Play Monopoly Day. Do you own the original or some version of the game? Do you enjoy playing Monopoly? How likely is it you'll play a game of Monopoly on November 19th? Ever been to Atlantic City? Ever taken a ride on a railroad? Is parking in your town free? Last thing you took a chance on?

We have the original version of Monopoly. The last time I played it that I actually enjoyed it was almost twenty years ago when LV, my brother John, and I visited one of the neighboring church districts and the family we had lunch with after church brought out their Monopoly game to play.

I've played it since as well, but it was more or less a form of torture.

I will not be playing it on Nov. 19th. I've never been to Atlantic City. Never had a ride on a railroad.

Parking is free in our town, though I basically never visit the town we have as our address. There's another town, a much nicer one, closer, but in a different state. Parking is not free there.

The last thing I took a chance on was getting a small block of cheese in a new flavor combination called Mango Fire. It's interesting. A little too hot for my taste, but I love the mango undertones. A little too mango-y for LV's taste, but he loves the heat. If there was a way to separate the two we'd both be happy. I'm glad we tried it, but we probably won't be getting more.

6. A song you like that has the word (or some form of the word) thanks in the title, lyrics, or meaning?

7. In keeping with this month's theme of gratitude....what is something you're taking for granted that when you stop and think about it, you're grateful for?

I think there's a lot of things we tend to take for granted until we lose it.

The list could go on for quite a while.

Several weeks ago I had mentioned how all the mothers other than me, sit around doing crocheting, knitting, and other crafty stuff while the children have their Christmas pageant practice.

Last week I made this thing for my mother-in-law for Christmas. She has been wanting one in green for a while already so this seemed like the perfect time to work on it.

Tonight I'll be working on one in blues. 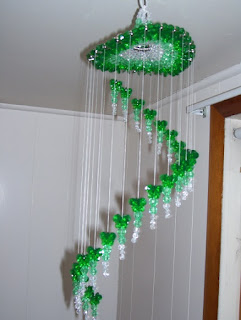