1. Are the leaves turning color where you live? Have they begun to fall? Will you have to rake when it's all said and done? Is that a chore you love or loathe?

The leaves have been changing color and a lot of them have fallen already. I shared the following picture of a local road yesterday, but I think it's pretty enough to share again. 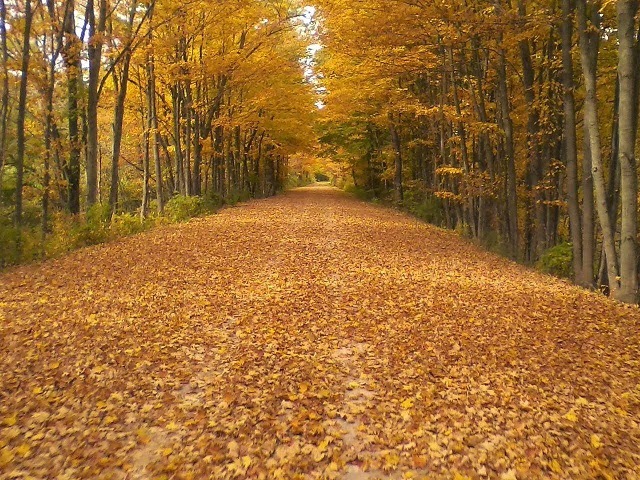 We usually rake our leaves. I don't have to since the children are still at the stage where they think it's great fun. I do enjoy it, but with only one rake there are enough turns being taken with the children that I don't get to do a lot.

I was ridiculously cold several days ago. I was sick, and shaking like a leaf from shivering so much.

3. After 20 seasons with the NY Yankees, Derek Jeter played his last official game Sunday afternoon. Jeter has been described even by opponents as a 'class act', both on and off the field. The NFL is back in action this month too, with several players in that sport also making headlines. What are your thoughts on athletes as role models? Should a professional athlete be expected to act as role model or is that going beyond their job description? What responsibility do the organizations these athletes work for have when it comes to dealing with off the field behavior? Discuss.

Athletes, celebrities, ................ I've long been scratching my head why people look to them as role models. I guess being in the public eye, you do put some expectations on them to conduct themselves in a certain way.

I want my children to have role models they actually know personally. One they see live their life in a God honoring way through good times and bad.

Being able to throw or hit a ball very well does not make someone a role model in my eyes.

4. What season of the year is toughest for you in terms of your health? Why?


Summer. I don't do well with heat at all. I had a heat stroke years ago which makes getting too warm a lot more scary than it used to be.
5. The top six healthy food trends of 2014 according to Eating Well are-

clean eating (more veg, less meat, less sodium, limit alcohol and processed foods)
trash fish (you know those fish that get caught in fishermen nets and are thrown back? It seems chefs are finding creative ways to make them more appetizing)
cauliflower (this year's IT vegetable)
kaniwa (essentially baby quinoa, so like quinoa only smaller)
fermentation (think pickling except with twists on flavor we're not accustomed to)
community supported food (farms operating with community support/membership).

Okay-so how many of the hot healthy food trends for 2014 have you experienced, encountered, enjoyed? Any you've tried and said ewwww? Any on the list you'd like to try before year's end?

We like cauliflower, I had no idea that it was the IT vegetable though.

Fermentation....... other than yogurt, I'm not a fan of most of the fermented things I've tried.

Thanks for bringing the end of summer.

7. What's something on your October calendar that makes you happy just thinking about it?

We start our fruitcake in October. I will be buying the things I need to start it soon.

It's a long drawn out affair to make, but the end results are so worth it, and it always makes me feel happy and Christmas-y when I start it.

Have any of you had any experience with stamps.com?

I read a lot of bad reviews about them after our own sour experience from dealing with them. I chose not to leave a scathing review, but wish I would have done a little more research before trying them and I would have seen they have a lot of unhappy customers.

We will not be doing business with them again.
Posted by A Joyful Chaos at 5:57 AM