When my brothers and I were little children we didn't have a huge variety of toys to play with and even fewer things to call our very own. I had my doll and its accessories and the boys each had a toy barn and a few animals.

The main toy box was filled with wooden blocks, empty pill bottles, a few odds and ends, and then our most prized toys; a Fisher Price ABC set, and pull along shoe shape sorter. 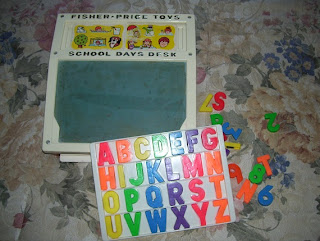 Books, games, and puzzles were an important addition to the things we enjoyed. And then there were also the simpler things such as; spinning buttons.
When ever we opened a bag of feed we used to save the string that had been used to sew the top shut. Mom would use a piece about three feet long and thread it through two holes of a large button and tie  the ends in a knot before handing it to us. Holding the ends we would spin it until it was wound tightly, then by moving our hands together and apart the button would spin making a delightful whirring sound. The bigger the button the better.
I was telling the children about it and they wanted to give it a try. We used yarn and the biggest button we could find. Sailor is doing the demonstration for us today.

A word of caution: Keep hair away from spinning button.
Posted by A Joyful Chaos at 11:02 AM