While I was growing up our family always had some type of baked goods to eat with our oatmeal at breakfast. Cakes and cookies were our favorite and pie would often appear as well. Especially cherry or Shoo-fly.

I often wondered who ever came up with making a Shoo-fly pie for the first time since it's a very cake-y type of pie and normally you wouldn't think of baking a cake in a pie crust, but somehow this really does work.

Rosebud was reading some Amish stories and Shoo-fly pie was mentioned which made her want to have some. So last evening I helped her bake several. I tweaked the recipe ever so slightly by substituting the lard with butter. I don't have the usual pail of lard tucked in a pantry like we used to and butter worked perfectly. 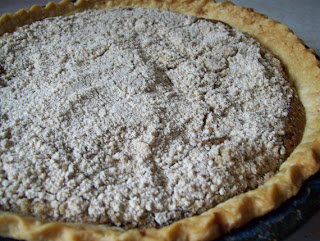 In a medium size mixing bowl combine all ingredients for the crumbs and mix by hand until uniform. Set aside. In a clean mixing bowl combine molasses, sugar, and eggs. Mix well. Dissolve baking soda in hot water and add to the molasses mixture. Mix well and measure one cup full into (each) bottom of two unbaked pie crusts. Top with half of the crumb mixture. Divide leftover syrup evenly between the two pie and sprinkle remaining crumbs over the top. 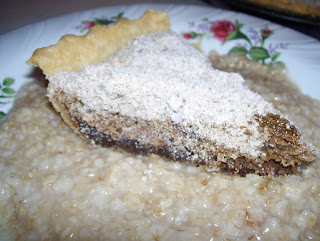 And this morning the children each enjoyed a small slice of Shoo-fly pie with their oatmeal.
Posted by A Joyful Chaos at 9:02 AM