Daddy's woodworking business was growing too large for the confines of the basement. Plans were made to build two 75' long buildings, one for woodworking and the other for a large show room to display the many different styles of furniture available. The shop would still be connected to house.

One of the first things that had to be done was cut down most of the pine trees that surrounded the house to make room for the building project. We all felt sad as one tree after the other crashed to the ground and only seven out of the original sixty pines remained standing. Daddy assured us once the new buildings were finished we would plant more trees to replace the ones that had been cut.

I looked forward to having a living room and sewing room in the house instead of having everything crammed into the kitchen to make room for a showroom in the other two rooms. Especially since LV had asked to come calling. Mom and Daddy had given their blessing but we would have to wait until after my seventeenth birthday.

This time instead of having frolics to build the addition Daddy hired a construction crew and every evening after supper he would get John and David to help him work on it. It took all summer and most of the fall before the building was done. We were all hoping to get everything done by August since there was another baby on the way. But the construction crew worked extremely slow and babies don't wait.

This time I was sure I would finally be getting a sister, but once again I welcomed another little brother. He was just as ugly as all my other brothers had been, but this time I didn't fret about it since I remembered how in several days they would start looking a lot better. I said something to that effect to Mom and she sounded horrified that I would even think her beautiful baby was less than beautiful and assured me once I have my own children I will think they are beautiful even if they don't appear that way to anyone else.

It was nice to not have to worry about getting hired help while Mom rested for six weeks. I was quite capable to go ahead and care for the family and the house on my own.

Around Thanksgiving we were finally done with the building and were able to move everything into the new showroom. The kitchen looked strangely empty when we moved the living room furniture out. As we were ready to take the shelves out of what used to be our store Daddy suggested he build a nice front on them and add doors and drawers.

Mom was thrilled at the idea and before long we had a beautiful sewing room where many happy winter days would be spent sewing and visiting. 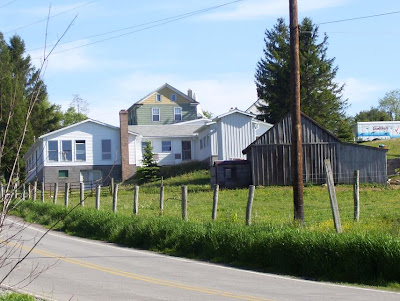 Baby Raymond grew and was a great source of joy for all of us, an addition we are still enjoying. Unlike the additions that were built to the house which was sold nine years later.
Posted by A Joyful Chaos at 11:29 AM