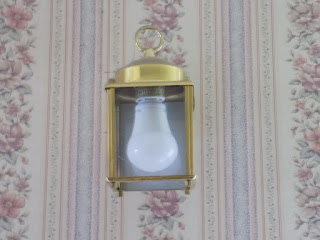 The children had already made their way upstairs to bed, while LV and I enjoyed a few minutes catching up on the happenings of each other's day before we retired for the night.
Before heading to bed I checked the laundry room and just as I came to the end of the hallway before turning into the laundry room the light turned on. There was no one there!!
Things like that aren't supposed to happen, especially not in our little farm house.
I tried to remain calm and walked back to the living room where LV was still relaxing on the couch. He looked up as I entered and immediately saw there was something amiss by the expression on my face.
"I'm just a little freaked," I admitted and proceeded to tell him what had happened.
He very sweetly, didn't laugh at my paranoia. Instead he took my hand and together we walked down the hall to the laundry room with the light shining brightly at us.
Just as we got to the end of the hallway, it flickered off. In the next instant I tore my hand from his clasp and flew back to the living room. I'm not in great shape at all, in fact most days the very thought of exercise is exercise enough for me. You'd never have guessed that though as I dashed down the hallway at a speed rivaling that of an Olympic sprinter.
LV stayed there quite unruffled and discovered the light bulb had not been screwed into the socket tightly enough and somehow the weight of someone walking on our creaky old floor had messed with its connection.
I'm happy to report that the mystery of the creepy light bulb was easily solved, and there is nothing weird going on in our home. And I'm once again moving at normal, ladylike speeds throughout the house.
Posted by A Joyful Chaos at 8:54 AM