Where the Tree Falls

"Where the tree falls, there shall it be," was a phrase heard in many an Amish sermon. Usually followed by warnings of how important it is to live in a way that when you die you're not doing something you wouldn't want to be doing when you meet Jesus. Because what ever you were doing or thinking at that moment, that is how you, the tree, will have fallen, and that's how you will be resurrected.

I was reminded of this last evening when someone shared a picture of the tombstone of one of my uncles. 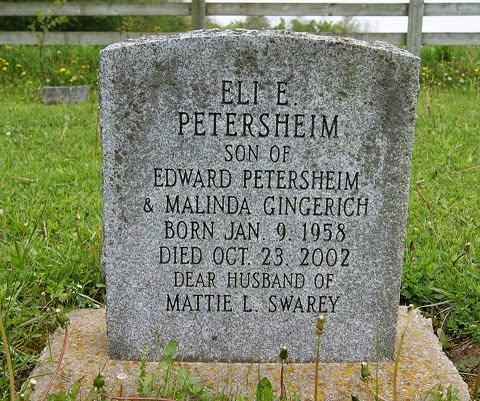 When he had died people were horrified. He had been helping one of his "English" neighbors and was driving a four wheeler, he had an accident and died at the scene.

"He drove right into Jesus with a four wheeler," people would comment and shake their heads sadly. What hope he had, had been dashed because of what he had been doing at the time of his death.

I still remember the awful horror we felt when we heard about what happened, but looking at that picture last night I realized how different we view things now, and how very thankful I am for that.

I no longer believe the little thing you are thinking or doing at the time of your death will determine where you spend eternity. But there is truth in that falling tree statement. You either die forgiven, a child of God, or not. There will be no changing that state afterwards.
Posted by A Joyful Chaos at 11:14 AM

Email ThisBlogThis!Share to TwitterShare to FacebookShare to Pinterest
Labels: Amish