When I was growing up Mom had two main cookbooks, Amish Cooking and Big Valley Amish Cookbook. She also had a recipe box filled to the brim with our family's favorite recipes that she had collected over the years. 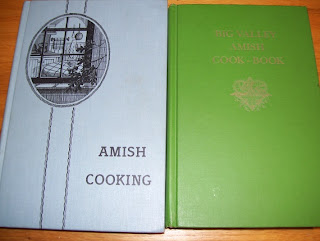 Daddy brought a box full of books home from an auction one day and hidden in the bottom was the giant Joy of Cooking cookbook. I spent hours poring through it, but somehow it hardly ever got used.

And then one day the mailman brought a package for Mom. Open on your birthday was written all over it. I thought she should open it right away, but she placed it on top of a cupboard where it waited until her special day. When I got up on the morning of her birthday I climbed up and removed the package and placed it next to her plate at the breakfast table to make sure she would open it first thing and finally reveal what was inside.

We all watched as she slid her knife through the tape and opened the box. I was almost as thrilled to see what was inside as I would have been had that beautiful glossy new cookbook been my own. Page after page of recipes each with their own mouthwatering photo. I was sure that was the best cookbook in the world.

Mom paged through it a little and then we ate. That forenoon I started looking through it, reading every recipe through as I went, by the time I had to help get lunch ready I wasn't even half way through yet so I propped it up on the recipe holder stand until I had time to return to it.

As we were eating lunch Daddy suggested he take Mom and the little boys to a nearby yardsale, while John, David, and I cleaned away the dishes.

Dishes were some of my least favorite things to do and we each had another helping of dessert after they left before getting started on the dreaded task of cleaning up. As I was getting up from my chair David flicked a spoonful of water at me.

I quickly flicked one right back at him. It kept going for a little while and John joined our little waterfight. This wasn't really fair, two against one. I picked up a glass of water and as they splashed me again I swung my arm in a wide arc determined to soak both of them really well.

They got some of the water, but the majority of it landed on Mom's new cookbook. Our laughter and waterfight came to an abrupt end and we got the dishes cleared in record time and had mopped up all the water on the kitchen floor before Mom and Daddy got back.

Mom walked in the kitchen and seemed pleased how clean everything looked, until she discovered what had really happened. All her fun yardsale finds were packed away until later. We had, had quite enough fun for one day.

I felt horrible about that book for a long time and was happy to be able to replace years later after I was married.
Posted by A Joyful Chaos at 5:35 AM