When I was growing up we used to have soup once a day. I used to love it and couldn't imagine ever not having soup often. However since we are married I discovered not all families enjoy soup as much as my family used to. So it has to be especially good before I am able to serve it at our table.

Several years ago I discovered this Chili soup. It was so different from any chili I had ever tasted I knew immediately it was a soup that would be welcomed by everyone in our house.

With the nip of fall in the air it seemed to be the perfect time to cook a batch last evening. The recipe I have is huge so I divided it and made only a fifth which was still way more than we were able to eat in one meal. But that is fine because it freezes well. I must admit if I had seen the recipe before I had tasted it I probably would not have ever made it. And so far everyone that has had some asked me for the recipe and when they see the ingredients they do a double take. So you'll just have to take my word for it. It really is good! 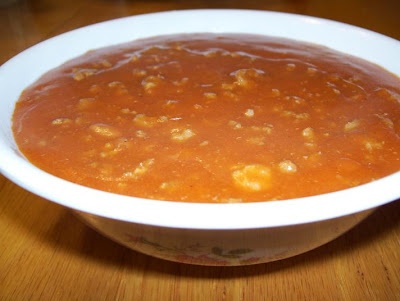 Combine ground beef, onion, salt, pepper, and chili powder. Fry in a large kettle until browned. Add baked beans and water and bring to a boil. In the meantime in a separate bowl combine the ketchup, flour, and brown sugar. Add slowly to the boiling mixture and stir constantly until soup resumes boiling. Turn out heat and let set for a few minutes before serving.

I also served cheese bread with the soup, unfortunately I didn't get a picture of the bread. I'll post that recipe the next time I make some.
Posted by A Joyful Chaos at 12:32 PM