It's the simplest games that keep us coming back to play again and again.
One such game is Fruit Punch. The first time we opened the box, and I saw the contents, I expected us to give it a good natured try, and most likely put it on the donate pile.
It included this big squeaky toy in the shape of a banana, and fifty-six cards. I was impressed by the quality of the cards, and the box was nice and sturdy, so at least it had that going for it.
We sat down, read the instructions, and commenced to play. At the end of the game we all looked at each other and said, "Let's play again!"
And so we did. Again, and again, and again until bedtime had rolled around.
The next day we played a few rounds, and the weeks and months that have followed have been peppered with Fruit Punch. Not every day, but still often. 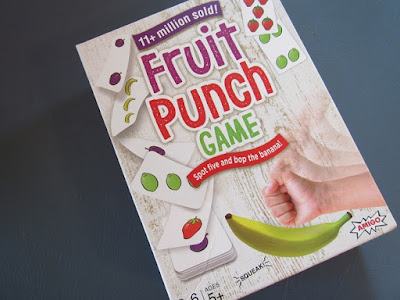 Maybe someday I'll share the story behind how our game inventory grew (basically exploded). We know we don't need that many games, but we agreed we want to try all of them at least once to see if we want to keep it or donate it. Fruit Punch made the cut. It's a keeper.
Posted by A Joyful Chaos at 9:02 AM