When Things Go Wrong in the Kitchen

A chocolate espresso cupcake caught Rosebud's eye as she was perusing Pinterest for cupcake inspiration. After printing out the recipe she headed for the kitchen to make them. Even though she followed the recipe to the "T" they didn't turn out anywhere close to the picture that had first caught her eye. Being a bit of a perfectionist who enjoys turning out beautiful things from the kitchen on a regular basis, she wasn't thrilled at all, especially since they had been intended to be enjoyed with friends who were coming over later that day. 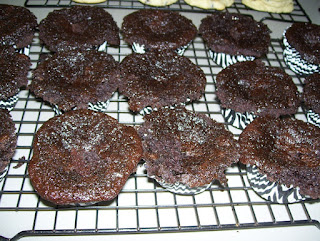 As we turned our attention to a tried and true recipe, I assured her that it's perfectly fine to have the occasional cooking disaster. They can easily provide memories you can laugh at for years to come, even handing down through generations, if the disaster was interesting enough.

I then proceeded to share the one "disaster" that has become a family favorite over the years.

My Mom was a young bride, intent on preparing only the best of things, and not be the absent minded cook that her sisters always said she was. Things were going great and a little more than a month had passed without burning anything when the one day they decided they would be going to pick strawberries after the evening chores were done.

There was bread to make that afternoon, and a garden to care for, and then helping with all the chores. After a busy day it was fun hopping on the open buggy and going to the local U-pick strawberry patch.

They picked until dusk and went home armed with lots of berries to be processed the following day. As they stopped in front of the house Mom hopped off the buggy and went inside while Dad continued out to the barn to care for the horse and do one final walk through the barn checking on all the animals before calling it a day.

As Mom entered the house she immediately smelled something bad. "The bread!!" She had forgotten all about it. Opened the oven door she quickly yanked out two charcoal black loaves of bread. She wrapped the bread into kitchen towels and put them on the back of the kitchen counter and then proceeded to open all the windows in hopes of getting the awful smell out of the house before Dad came in.

He came in, and didn't say a word about anything smelling bad. She was relieved, and went ahead and prepared a bedtime snack for them to eat.

As they were sitting there eating, something went "cr..aaaa..ckkk! Followed by more cracking noises. She tried to pretend she didn't hear the noise coming from beneath those towels on the kitchen counter. Dad however asked what that sound was.

She showed him the burnt bread. Even though it was solid black he was sure that they could slice it and eat the middle. Armed with a knife they started sawing and hacking their way through the bread. It was black, as black could be except for in the very middle there was an inch in diameter, round spot of brown bread.

Dad found it incredibly amusing, and Mom has laughed a lot about it over the years as well. It took her a while though before she shared the story with her sisters who had been waiting to hear about all the cooking disasters they knew she would be making once they weren't there to make sure everything was done just right.
Posted by A Joyful Chaos at 5:55 AM