After spending 45 days working on my fruitcakes the day finally arrived when I was supposed to bake them.

You would think after waiting that long on a fruitcake I would have learned the art of patience, but apparently not. 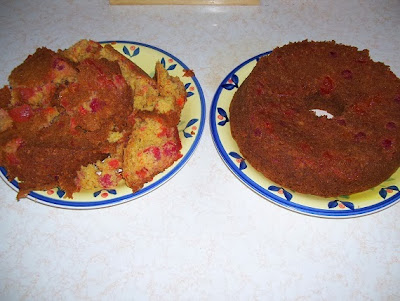 The cake on the left I inverted almost immediately after removing it from the oven and the poor thing broke into pieces, the children cheered, because that meant they would be getting to eat it much sooner.
Cake two cooled in the pan before I tried removing it and it turned out beautiful. Two down and one to go and my fruitcakes will be done until next year when I start the process all over.