1. Since you weren't Hodgepodging last Wednesday, how did you pass the time?

Our phone and internet was off 75% of the time last week, including all day Wednesday, so I didn't really miss it. I spent my time doing some other writing and jotting things into my big book of ideas that I don't want to forget to write about someday.

2. What's the first word that comes to mind when I say marriage? Yes, one word.

3. Summer officially arrives in the Northern hemishpere later this week. Does it feel like summer where you live? Describe your idea of the perfect summer day.

It's warm and humid, so yes it feels like summer. Blah! I'm missing winter already.

My idea of a perfect summer day is being able to go about my day in a beautifully air conditioned house.

4. "Deep summer is when laziness finds respectability."(Sam Keen) Is laziness ever respectable? Do you have a lazy summer planned, or something semi-ambitious?

Heat saps all the energy from me and I slow down. I wouldn't necessarily label it as being lazy, more of a survival mode.

I'm looking at a summer filled with writing. My goal is hitting between 120,000 to 150,000 words so my summer is looking anything but lazy.

5. Past or present, who's your favorite television dad? Why is he a favorite? Is he anything like your own dad?

Pa Ingalls. I liked how industrious, kind, and helpful he was, and how important family seemed to him. There are a lot of similarities between him and my dad.

The end of school picnic we had when I was in first grade still stands out in my mind as one of the best. Toasting marshmallows and hotdogs over a fire, enjoying all the yummy picnic foods the mothers brought, and a treasure hunt when we were done eating. The best part perhaps was when the cranky teacher was informed she would not be needed the next year.

7. The travel site Trip Advisor lists the top five islands in the world for 2014 as- Ambergris Caye in Belize Cayes, Providenciales in Turks and Caicos, Bora Bora in French Polynesia, Marco Island Florida, and Lewis and Harris in The Outer Hebrides (Scotland). Have you been to any of these? Of those listed (and if price were not a factor) which would you most like to book for a holiday?

I have never been to any of these, but would love to visit Bora Bora someday. I'm doubtful it will ever happen, but it doesn't hurt to dream.

We have been getting a lot of rain, which caused our normally gurgling little creek to spill over its banks and made the waterfall thunder in its attempts to hurry the water on its way. 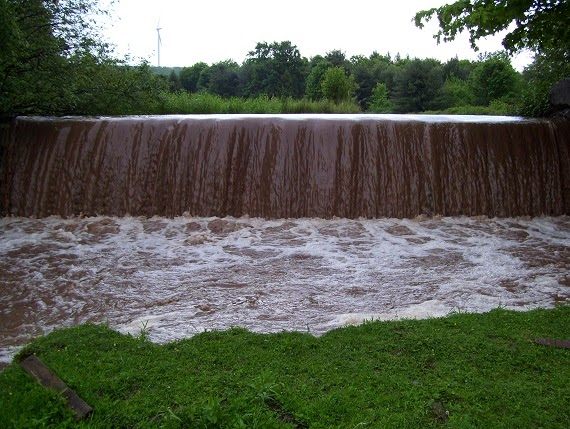